Needless to say, there are some absolute classics in there!

The summer job is a rite of passage for many kids, who are encouraged by their parents to get out of their hair and go and learn valuable lessons about responsibility, the value of money and hard work.

1.
I worked at a historic site once where I had to dress as a bison and be chased by hordes of 5 year olds in a bison hunt. Once after being killed in the bison hunt I was breathing too heavily from running. One of them yelled “It’s alive” and punched me in the face
km_belland

2.
I worked at a nursing home and walked in on a new girl giving a gentleman resident a bed bath. She complained that he wasn’t being cooperative and that he wouldn’t even roll over so she could wash his back. I had to inform her, that he had died 10 minutes ago.
mrsbooge

3.
I was 10 and went to my grandfather farm he gave me 10 $ to be a scar crow, i stood there in the sun yelling for an hour until my mom came and yelled at him.
FishHeadss

4.
I was hired at an elderly people’s home for patients with dementia.
On my first day I accidentally pressed the door button and all the old people escaped. We had to run through town rounding them up.
nataliekendel

5.
As a public school teacher in North Carolina, I don’t make much money. So I heard to deliver pizzas one summer. My SECOND delivery was to one of my former students. Her first words, “What, you got fired?”
aaronkollar

6.
When I was 14, I took a babysitting job. This little demon made my life miserable. He was such an evil kid that when he “wanted to tell me a secret”, I leaned in close, and he stabbed me IN THE EAR with a pencil. I hear he is in jail now (Well not in THAT ear!) .
Wyldwurm

7.
When I had to play Kid (uncredited) every summer for 3 years. 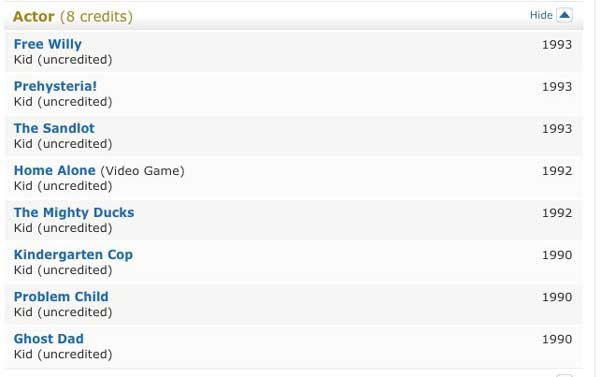 8.
One summer when I was about 10 years old, our neighbor hired me to take care of their elderly dog while they were out of town. The dog died on day 2.
mags

9.
I earned $30 working construction for a temp agency one day in college. When I finished, there was a $35 parking ticket on my car. I refer to it as the day I paid to work…
DonnyJ44

10.
I was babysitting two kids. One ran out the front door, one went out the back. When I ran around the house to find them, they ran back inside, locked me out, and turned the sprinklers o
Swearin_Rodgers

11.
In college, I tried nannying during the summer. Seemed harmless until I told the boy “no” once and he threw a knife & stabbed me in the arm. Nope. I didn’t need money THAT bad.
collzorgs

12.
My first summer job at Chuck E Cheeses. On one of our hotter days I had to wear the Chuck E costume and wave at cars and people. It got so hot I passed out. The aid cars came and when they took the head off kids screamed “Chuck E’s dead!”
irishrose8

13.
Had A Job Walking Five Chihuahuas. When They Got Tired, I Had To Carry Them Home. Two In My Arms, Two On My Shoulders & One On My Head.
whoopiepie10

14.
One summer I hung up signs saying I’d mow lawns. I tried to quit when my allergies got bad, but my dad wouldn’t let me because “you made a commitment to the community.”
jimmyfallon

15.
“Plant Manager” … turned out to mean literally watering all the plants in the office. My friends started calling me Ficus Boy. I lasted 2weeks.
TechCoastPC

16.
Once my boss had so little faith and trust in us that she would go around and feel the toilet brushes with her bare hands to see if they were wet after cleaning and then would yell at us if they weren’t. She didn’t seem to understand why we were all disturbed.
itsShyyyyyyyyyy

17.
One summer I worked in a cornfield, where we had to mix the female and male parts of different corn to the plants, pollinating them. In other words, I mated corn.
FateDecided

18.
During the summer I broke my ANKLE yet I still had to work. And GUESS where I work… IHOP *Customer walks in* “Hello Welcome to IHOP” Customer replies “ I didn’t know IHOP meant UHOP”
Miriamq19

19.
I worked at a hot dog shack in high school… We had to wear shirts that said “Wiener Slingers”.
hgalexan

20.
When I was about 15 I slung bales of hay for 9 hours in the 110 degree heat for my neighbor who was about 80 with 4 other kids my age with water only breaks. I got paid 50 cents on my first and only day while the boys got $2.
sagechano