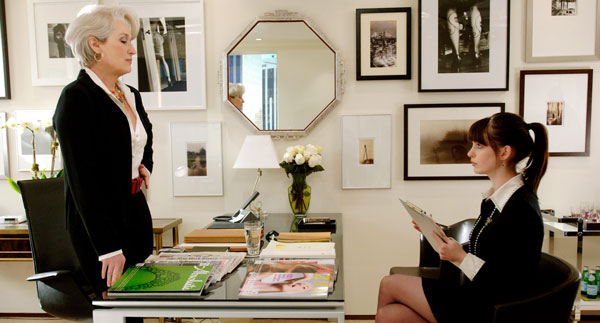 1. Runway would be a mostly-online publication with a print issue a few times a year.

2. Andy would be an intern, and instead of a guaranteed job anywhere she likes at the end, there’d be a slim chance she could be hired as an assistant full time.

3. And she’d be on a zero-hours contract so would never even know if she has work the next day or not.

4. One of her duties would be running Miranda’s social media.

5. And she’s spend most of her time blocking the haters on Miranda’s Instagram.

6. Instead of being admonished for having chowder, Nigel would judge Andy for having gluten.

7. Andy would have a super-long commute every morning because she wouldn’t be able to rent anywhere actually near the building.

8. Instead of super OTT outfits, everyone would be as minimalist as possible and wear black jeans and white tee.

9. Andy would have to get the twins backstage tickets to Hamilton instead of landing Harry Potter manuscripts.

10. Miranda would wear tiny sunglasses instead of oversized ones.

12. A Runway employee would have to teach Andy how to contour, bake, and apply fake lashes, but in a way that doesn’t make it look like she’s wearing any makeup.

13. A lot of Andy’s problems to do with running errands and finding things would have been solved because she’d have a smartphone with 4G data.

14. Andy would probably become a bit of an Instagram ~influencer~ post makeover with lots of outfit photos and flatlays of her notepads and coffees with hashtags like #thedailygrind.

15. She’d make a lot of money on the side selling stuff from work on Depop. Her friends would all work in digital and be trying to grow their online followings, so would love her getting them free things and be more understanding of the job.

16. Andy’s new ~swish~ hair would be a tousled lob with balayage instead of long hair with bangs

17. Emily’s ginger quiff would be swapped for a ginger slicked back low ponytail.

18. Nate would have an obnoxious food Instagram where he’d post about freakshakes and dirty burgers. He would be looking to set up a food truck that serves fusion cuisine.

19. Miranda would want a flat white or a butter coffee instead of a complicated latte. Or she’d order anything with tumeric.

20. Rather than regular sparkling water, the whole office would drink La Croix.

21. The guest star actress would be one of the Hadid sisters instead of Gisele.

22. Andy would never get through to anyone on their cell phone because nobody answers them anymore or they’re always on silent. Instead, she’d contact designers through WhatsApp.

23. None of her and her fellow early-twenty-something friends would be rich enough to dine at a fancy restaurant and would instead be at an ~ironic~ themed bar, or one that used to be an old toilet cubicle but is now converted into a speakeasy.

24. Andy wouldn’t gift an expensive cordless landline phone she got from work, instead it’d be an Apple watch.

25. Andy would know exactly which table to put The Book on because Miranda would be into minimalism so there would only be one side table in her entire house.

26. Caroline and Cassidy, Miranda’s children, would be called Cairo and Vida.

27. Miranda would constantly be Facetiming Andy to see if she’s where she’s supposed to be or using the “find my iPhone” app to track her.

28. “Florals? For spring? Groundbreaking.” would be replaced by someone suggesting millennial pink or palm-leaf print.

29. Christian would be a Softboy™ who would ask to photograph Andy for his photography account. He would use cringeworthy poems as his captions that say things like “the taste of cigarettes dances on my tongue, but the taste of her kiss dances on my heart.”

30. He would also always wear Vans, but with suit trousers, and have a haircut that’s really short on the sides but long on top.

31. Andy would never have to go and run to restaurants for Miranda because Deliveroo and UberEats exist.

32. And she would have just put her phone on silent when Miranda phoned at the end or blocked Miranda’s number instead of throwing it into the damn fountain.

Article have been lightly edited for length/clarity.
Via BuzzFeed

17 Jokes That Only The Smartest People Will Get
When a Crow Dies, Other Crows Investigate
18 Of The Cutest Children’s Halloween Outfits From This Year
How Much Do Americans Spend On Pets?