18 Wrong Number Texts That Will Warm Your Cold, Dead Heart

1. I had accidently given my son the wrong number to send his grades to his grandfather. This was the stranger’s reply. 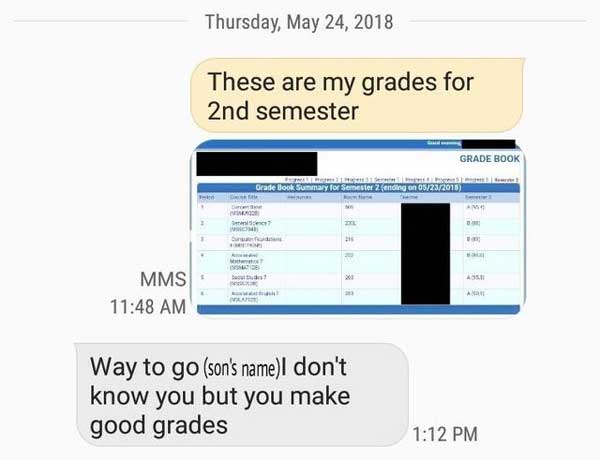 2. Wrong number at the right time. 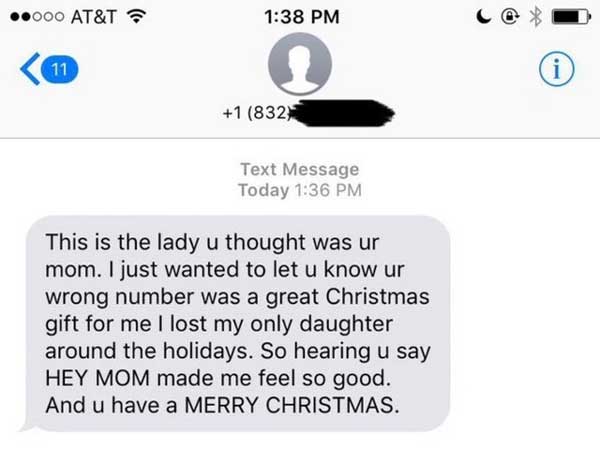 3. This person got a wrong number text from a very sweet grandma, and ended up receiving a box of homemade baked goods from her.

Send her a thank you card back!
prplpineappls

4. Tried to text an old college friend, turns out his old number belongs to a delightful woman named Karen

5. Some work friends and I got a picture sent to us by accident (they had the wrong number). We decided to make their day.

6. This young woman accidentally received an invitation to a wake, but she showed up anyway to pay her respects to the family.

7. This teen got a wrong number text from someone who works for the Tampa Bay Buccaneers — and ended up getting a signed jersey for being honest.

8. Dad sent my grad pics to the wrong number

9. This man received a wrong number text from someone announcing their engagement, and he replied with some lovely advice for the couple.

10. The manager of the cleaning company we use had a wholesome reaction when I accidentally sent her a text meant for my wife. 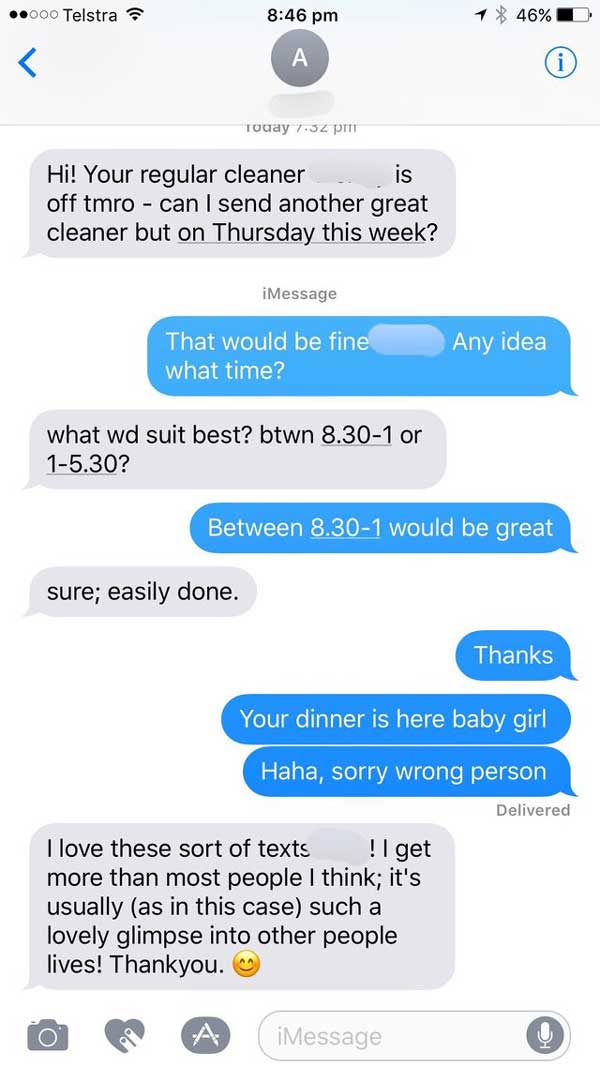 11. This person received a picture of homemade pies from a total stranger — and then got a nice recipe out of it. 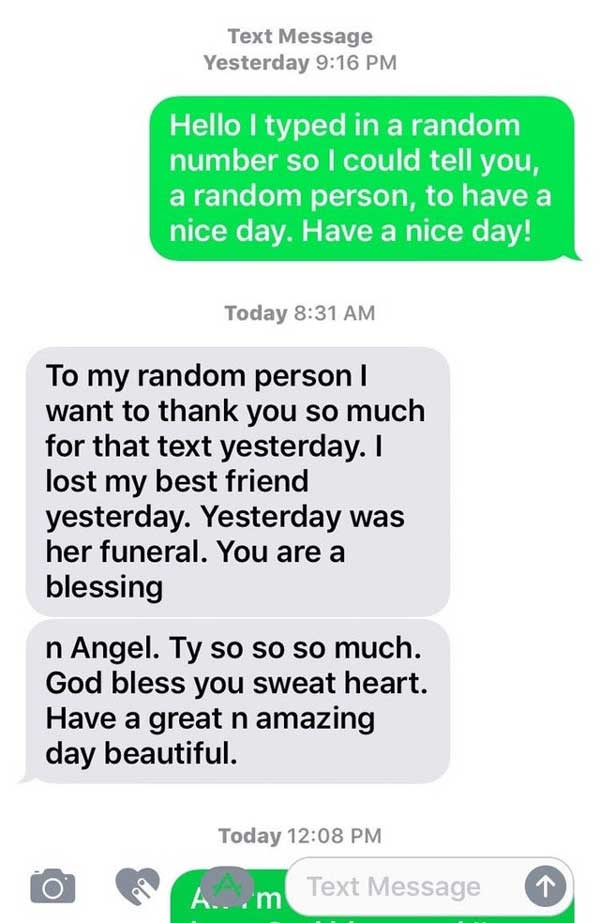 13. This woman accidentally sent pictures of a dress to the wrong number, but she ended up getting a seal of approval from the family who received them.

14. After my dad passed away, I texted him periodically. One day someone responded. 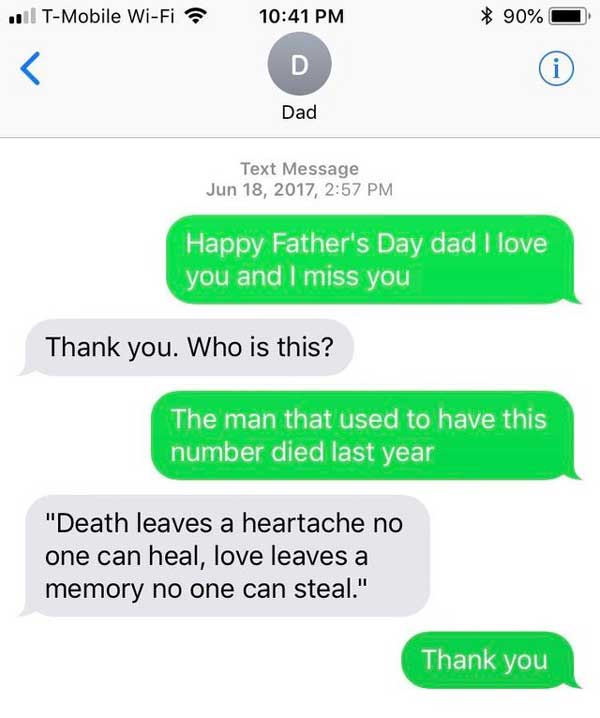 15. I nearly deleted my late grandmother’s texts by turning on the delete texts from over a year ago . I sent a message to her phone to make sure they wouldn’t be deleted, and the person who got her phone number replied. 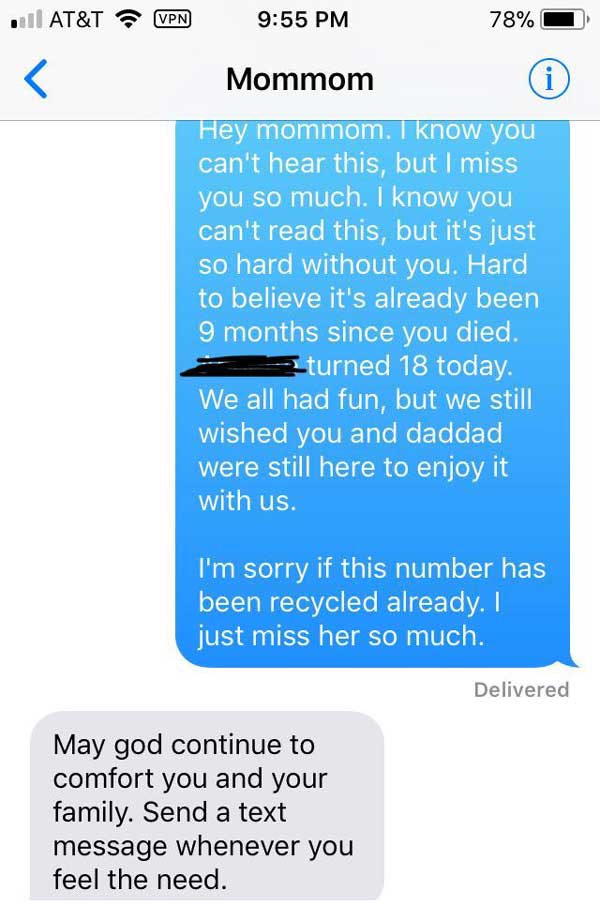 16. These two people started to get into an argument over phone number confusion — but when one person mentioned they were feeling depressed, the other replied with words of encouragement.

17. This person received a wrong number text for “princess,” and the two quickly fell in love. 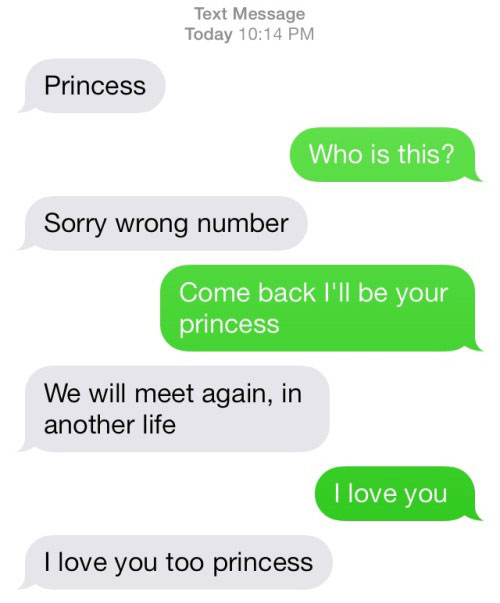 18. This grandmother texted the wrong number an invitation to Thanksgiving dinner. And even when she realized her mistake, she made it clear that the invitation still stood.

What is the craziest thing you have ever said (or done) at an interview and still got the job?
What Animals Freeze in Winter and Thaw in Spring?
People Are Sharing The Wisest Sayings They’ve Ever Heard, And It’s Almost Too Real
Why You Should Not Announce Your Goals?