1.
Being in a relationship is just yelling “WHAT?” from different rooms for thirty years and then you die
ErinChack / Via twitter.com

2.
keeping our marriage fresh/exciting via texts

3.
Marriage is basically agreeing to not sleep in a comfortable position again for the rest of your life.
AlanaRockz / Via twitter.com

4.
*pulls curtain back while wife is in the shower*
me: Are we – stop screaming, it’s just me- are we out of Cheetos?
iwearaonesie / Via twitter.com

5.
My husband is on the roof – only a few inches away from an insurance claim that could completely change my life.
StellaGMaddox / Via twitter.com

6.
The secret to a successful long-term relationship is the ability to laugh at the same joke 3,682,000 times.
missmayn / Via twitter.com 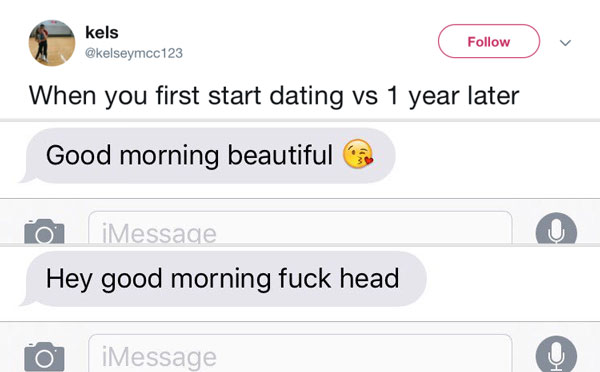 8.
dating: its cute that you dont eat all the chicken off a wing
marriage: there’s like $1.75 worth of chicken left on those bones, meghan
murrman5 / Via twitter.com

10.
[falling asleep]
Him: *wraps his arms around me & softly kisses just below my ear* goodnight, my love
Me: *reaches back to touch his face* get the fu*k off my side of the bed
smithsara79 / Via twitter.com

11.
Being in a long term relationship means getting into a fight while making quesadillas because there’s not enough cheese for the both of you
AM_Rau / Via twitter.com

12.
Being married means every day is an episode of Amazing Race Couples Edition – only it’s just me trying to find stuff my husband misplaced while he is behind me yelling “you threw it away didn’t you?”
DomesticGoddss / Via twitter.com

13.
I came home and it took me 45 mins to find my wife. She is hiding in this couch. Pro tip: Marry your best friend.

14.
Writing a love poem called “Put the Dishes in the Dishwasher, but Not Like That.”
yenniwhite / Via twitter.com

16.
My marriage has turned into a nightly routine of my wife and I running down the list of reasons we should go to bed early so we can wake up and get sh*t done the next day, then by the 675th cat gif on reddit we both yell “how the fu*k is it 3am?!” Worth it. I love her.
TPAIN / Via twitter.com

These words describe any relationship status
26 Tweets That Teens Won’t Really Understand Unless They Go To College
What Events Happened on March 18 in History?
How to Tell Time by a Cat’s Eye