20 Tweets That Are Both Funny And Sad

1.
My annoying little cousin is bragging about how he sleeps in a race car bed. Whatever, you little idiot.. I sleep in a real car.
Ryan_Patricks / Via twitter.com

2.
[buying a dog]
hi yes i want to be absolutely devastated in like 11 years or so
panmidwest / Via twitter.com

3.
A haunted house but instead of scary monsters its 15 ppl asking u what u are doing with ur life & who u r marrying
oh wait thats tnksgiving
lindsay_fuce / Via twitter.com

4.
Me: *slapping my older brother in the face with his own hand* haha stop hitting yourself, why are you hitting yourself
Sister-in-law: *crying* is this why you wanted an open casket
smithsara79 / Via twitter.com

5.
I finally got my average resting heart rate down to 65 beats per minute. Only 65 more to go.
DrSprankle / Via twitter.com

6.
Nobody talks about Jesus’ miracle of having 12 close friends in his 30s
Mormonger / Via twitter.com

7.
I graduated from law school 6 years ago with $250,000 of student loan debt. But after years of hard work and tens of thousands of dollars of payments, I can officially say that I now owe $315,000.
Hooray!
MattLaneWrites / Via twitter.com

8.
the next call of duty should be a realistic RPG that starts with you working at little ceasars and an army recruiter lies to you at the mall
jackdwagner / Via twitter.com

9.
Me: please grab some updog on the way home
ExWife: for the last time the kids and I are never coming back
Me: not much what’s up with you?
smells_fine / Via twitter.com

10.
Tired of being single? Just lower your standards a bit. My new girlfriend is a coconut taped to a mop.
Mike_Bianchi / Via twitter.com

11.
me to my anxiety: people are focused on themselves. they’re not thinking about you
depression: ever
me: that’s not what i meant
jaboukie / Via twitter.com

13.
Kids, stay in school and get a good degree so you can spend 40% of your life on conference calls
InternetHippo / Via twitter.com

14.
You’ll grow up not every really knowing if you deserve love, but one day you’ll meet someone who loves you, and you’ll be able to accept yourself. Then, once they really get to know you, they’ll find you unbearable and leave, but the important thing is to stay hydrated.
frankieboyle / Via twitter.com

15.
Let’s play a game of MILLENNIAL MONOPOLY. The rules are simple, you start with no money, you can’t afford anything, the board is on fire for some reason and everything is your fault.
TechnicallyRon / Via twitter.com

16.
me at 14: can’t wait to travel the whole world once i’m earning my own money
me now: mustn’t forget that tupperware at work, it’s my only one
itsBOMBARDIER / Via twitter.com

17.
doctor: [handing me my new born baby] I’m sorry but your wife didn’t make it
me: [handing baby back to him] bring me the one my wife made
Doughbvy / Via twitter.com

18.
A job is more than a paycheck. It’s also a place where you cry in the bathroom
KevinFarzad / Via twitter.com

19.
me at 6 y/o: bilingual, genius iq, mentally healthy, able to do math
me at 18 y/o: illiterate, health is nonexistent, and needs a calculator to solve 6+8
anemicfatty / Via twitter.com

20.
[concert]
SINGER: hows everyone doin tonight
CROWD: woo
ME (from the back in a normal speaking voice): it’s actually been a tough few months
bobvulfov / Via twitter.com 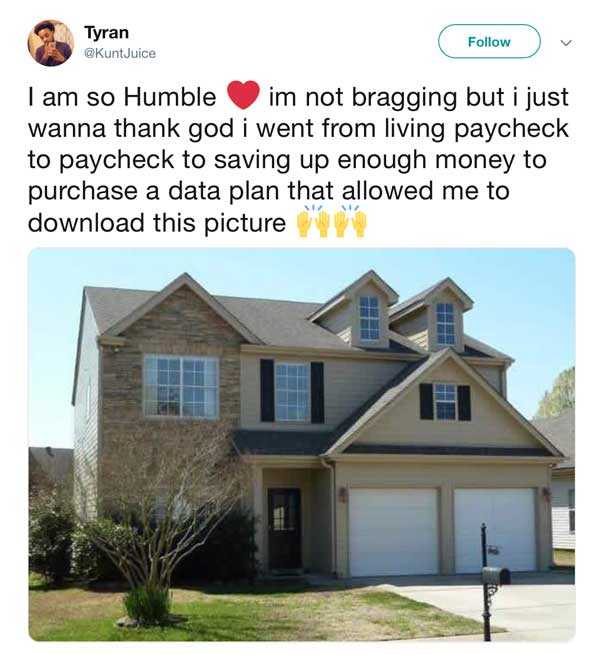 12 Tweets About Food That Will Give You A Laugh-Induced Stomachache
Africa is Way Bigger Than You Think
The Simple Mistake That Affected Life Greatly
16 Pictures From Japan That Will Make You Say, “That Is SMART”