1. What getting older really means
Me at 15: Why do my parents watch fu*king HGTV all day?
Me at 23: Damn, the granite countertops really do make that kitchen pop
MrFilmkritik / Via twitter.com

2. The ULTIMATE bar
Why do bars only play sports?? I want an HGTV bar. Take a shot every time someone says shiplap and shotgun a beer every time a reno goes over budget.
AnnaRedGURL / Via twitter.com

3. The emotions. THE EMOTIONS
me: lol why do ppl always scream at the tv during sports? they know the players can’t hear them right?
me during house hunters: 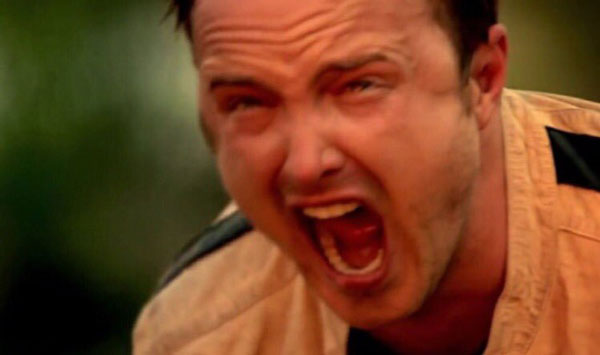 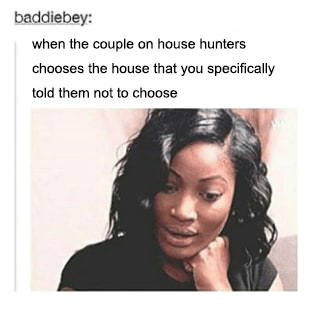 5. Every episode of House Hunters
[House Hunters episode]
HUSBAND: “I sell used 8-track tapes”
WIFE: “And I hang potatoes in people’s garages”
HUSBAND: Our budget is $950K
jg_kb24fan / Via twitter.com

6. I mean, every single episode
House Hunters intro…
HIM: I’m a hat critic for a blog.
HER: I found a cigar box containing 2 gold coins.
HIM: Our budget is $1.4m
afterglide / Via twitter.com

8. Every one!
[House Hunters episode]
HUSBAND: I’m a freelance hamster trainer
WIFE: And I tune harmonicas part-time
HUSBAND: Our budget is $950K
ValeeGrrl / Via twitter.com

9. Every dang time.
House Hunters be like: I rock climb for living and my wife sells umbrella insurance from home. We have a budget of 1.3 million.
JumpManZ / Via twitter.com

10. The best idea for a show
HGTV should make College House Hunters. “Our pong table would look great here. I can really see myself passed out on these hardwood floors.”
jlfish26 / Via twitter.com

11. What flipping a house means to you
On HGTV they can flip a house in a month and I’ve been “getting ready to vacuum” for the past two weeks.
AbbyHasIssues / Via twitter.com

12. Tiny House Hunters in a nutshell
a person on tiny house hunters who wants to buy a tiny house: [walks into a tiny house] wow this is tiny
ashishorny / Via tumblr.com

13. Job qualifications
{at Home Depot job interview}
Any home improvement skills?
Me: No, but I often guess correctly which home they’ll pick on House Hunters.
AmericanGent69 / Via twitter.com 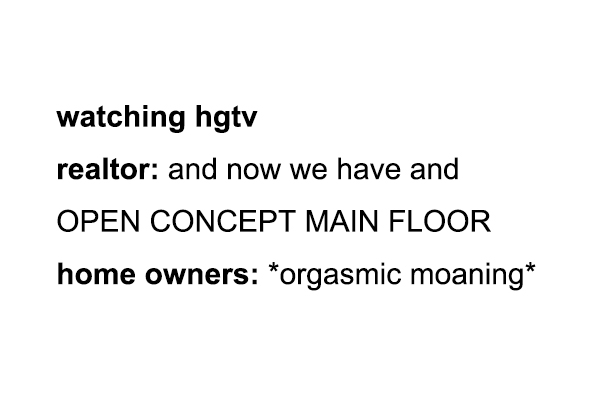 15. The show everyone secretly wants to host
A show on HGTV called “YUCK!” where I walk through people’s homes and point out things I don’t like and then leave.
LauraBenanti / Via twitter.com

16. You versus HGTV
Healthy people: my body is a temple.
Me: my body is a house that’s been abandoned for decades and needs HGTV to do an entire special on fixing it up.
MichaelJTiberi / Via twitter.com

18. And, finally, DEBORAH
me at age 10: why do adults like HGTV
me 10 years later: tile floors? with THOSE cabinets?? ugh, you’re killing me Debra!
CodesterCC / Via twitter.com