These stories are frightening without any ghosts or goblins.

1.
I had a kid come to my door later than all the other kids. He dressed all in red. He didn’t say trick or treat he said I’m your period, sorry I’m late!
talktoalyson / Via twitter.com

2.
I was the class clown and thought it would be funny to come to school dressed as our teacher for Halloween. I showed up early and sat at the teachers desk, then the teacher comes in dressed as me and sat at my desk. I guess he overhead my plan
RealMrGerardo / Via twitter.com 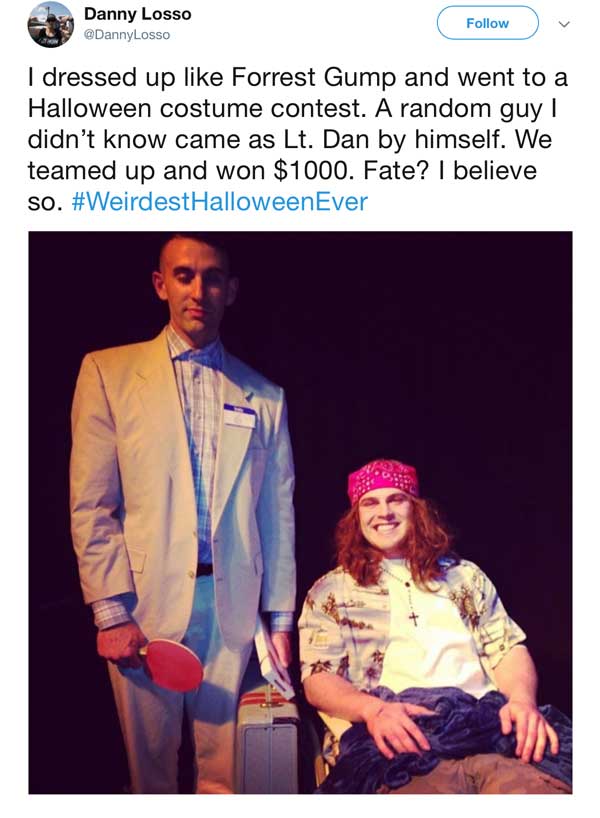 4.
In 1994 I went to a party where three people dressed up like David Hasselhoff from Baywatch. At one point, someone accidentally fell into the pool and all the Hasselhoffs jumped in to save him.
jimmyfallon / Via twitter.com

5.
I brought the wrong kid home. Didn’t notice till the mask came off.
RowdyFallon / Via twitter.com

6.
One time my mom did a full witch costume, green face and all. Neighbor asked “finally dressed as your true self?” She said “no, I modeled it off of your wife’s wedding photos.” We don’t speak to them anymore. (To be fair, he was rude for no reason).
JillsNPotions / Via twitter.com

7.
I had to work on Halloween last year and this girl in a taco costume came in, ordered tacos, and about 3 bites into it she asked her friends “is this cannibalism?”
NisaMarie6 / Via twitter.com

8.
We had a lady down the street “crazy Lynn” she gave us cigs instead of candy. We were like 8.
ktchamplain / Via twitter.com

9.
Halloween was a relatively unknown concept in 80s Germany, but as kids we tried really hard to establish it in our neighborhood. An old lady called the police and we were harshly interviewed by them. I was 10 years old and in a self made Werwolf costume.
SeithTristan / Via twitter.com

10.
My husband stuffed his clothes to make a scarecrow and sat it on a bench in our yard the week before Halloween. On Halloween he traded places with it and scared the poop out of the trick-or-treaters.
ellceem / Via twitter.com

11.
Once I came by a house that was giving out $50 Starbucks giftcards instead of candy.
haileynma / Via twitter.com

12.
I was at a party and two people dressed as Hillary Clinton and Donald Trump started making out
dsvobo / Via twitter.com

13.
Decided to go trick-or-treating at age 19 with a bunch of college friends. We knew we were too old, so we came up with a gimmick: Halloween carols. We changed the words of Christmas carols to be about monsters and candy. Our college president loved it.
katrinahopes / Via twitter.com

14.
I’m an adult in my 30’s who is very short, about 10 years ago I convinced a really tall friend of mine to take me trick or treating, I dressed up from head to toe and held her hand as we walked (we shared the candy after)
RDJanes1 / Via twitter.com

15.
One time I went to a Halloween party dressed as Where’s Waldo and my friends thought it would be funny to pretend they couldn’t find me the whole night
brooke_ranson / Via twitter.com

17.
As a kid I went trick-or-treating and a man in a mad scientist costume gave me a bag of sauerkraut when I knocked on his door.
emilymader97 / Via twitter.com

18.
I live in Hong Kong, in a neighbourhood where many old Chinese people have never heard of Halloween. One year I remember there was a guy who didn’t understand the benefit of kids getting candy. He gave us cough drops, saying it was more useful than candy
joypamnani / Via twitter.com

19.
To get to the house where a Halloween party was one year, you had to park at a grocery store and walk across the street. A friend of mine had dressed up as Moses and parted the road every time someone arrived.
quizat_zatarak / Via twitter.com

20.
I dressed as Mr. Peanut and got pulled over by a cop. He thought I was a potato and asked if I was baked.
backinpack / Via twitter.com