1.
I’m 5’11”. Tried on winter coats today. Sleeve length was like a dark comedy. Unless you don’t mind 3/4 sleeves in -30 degree weather.
northstoryCA / Via twitter.com

2.
Girls be like…”if he ain’t at least 6ft tall I can’t talk to him!” ……lol my minimum height is pretty much 6’7 or else I’ll be taller than you in my heels
RavenElyseTV / Via twitter.com

3.
Browsing frocks from a “tall” range online during my break.
“Model: 5ft9″
Give me strength.
BeccyBarr1 / Via twitter.com

4.
Public service announcement: Do NOT wear heels to a gala at a children’s museum!! The potties are VERY low.
Kateywrites / Via twitter.com

5.
God, I hope the seat next to me is going to remain empty
So that I can get some room to stretch my legs
I swear that those planes don’t care about tall people
diya_gs / Via twitter.com

7.
I keep hitting my head on ceiling fan chains throughout my house.
Dawniemyte / Via twitter.com

8.
Dear Shoe Designers of the World,
Why does every pair of cute wedges need to be 78 inches tall? Can we compromise in the middle w/ a cute 2(ish) inch wedge?
Love,
Your Already Very Tall Friend Who Wants to Wear a Heel on Occasion Without Looking Ginormous#TallGirlProblems
Lindsee_Lou / Via twitter.com

9.
A lady at Walmart just asked me to follow her around the store so I could get items off the top shelf for her
laurenmoses21 / Via twitter.com

10.
Work uniforms came in … told they run short, so I ordered a 38 inseam & they shipped me 28 inseam aka Capri pants
CarlaFinch / Via twitter.com

11.
I just remembered that in high school everyone would ask me where the flood is since my pants were too short and I never understood because I didn’t realize that that wasn’t how pants were supposed to fit.
STSporthorses / Via twitter.com

12.
When he’s cute but then you find out he’s only 5’7″. Now you gotta break the news that your 4 inches taller then him.
siennaturtle / Via twitter.com

13.
Any other tall women out there holding out for the cropped trend to die? No more cropped tops, no more cropped pants. I look like a giant wearing shrunken children’s clothes.
RainWalkWithMe / Via twitter.com

14.
Unable to cross your legs under most tables.
krystalblais / Via twitter.com

15.
When you sit on a bar stool and match your friends height standing….
tallchickprobsx / Via twitter.com

16.
I hate being tall because they don’t make shorts long enough to where I look decent and not some girl with her a*s hanging out
_jaayortiz / Via twitter.com

17.
I just want a sweater dress that doesn’t look like a regular sweater when I put it on. Is that too much to ask?
mynameismarleyy / Via twitter.com

18.
Tights labeled “one size fits all” are one of life’s great lies.
Unless they’re only meant to go mid-thigh high.
In which case I’m all set.
elizabethalbell / Via twitter.com

19.
Got a wrap dress where the waist hits me in this weird netherland, like three inches above my actual waist. I’m calling it a low Empire style.
AinsleyWynter / Via twitter.com 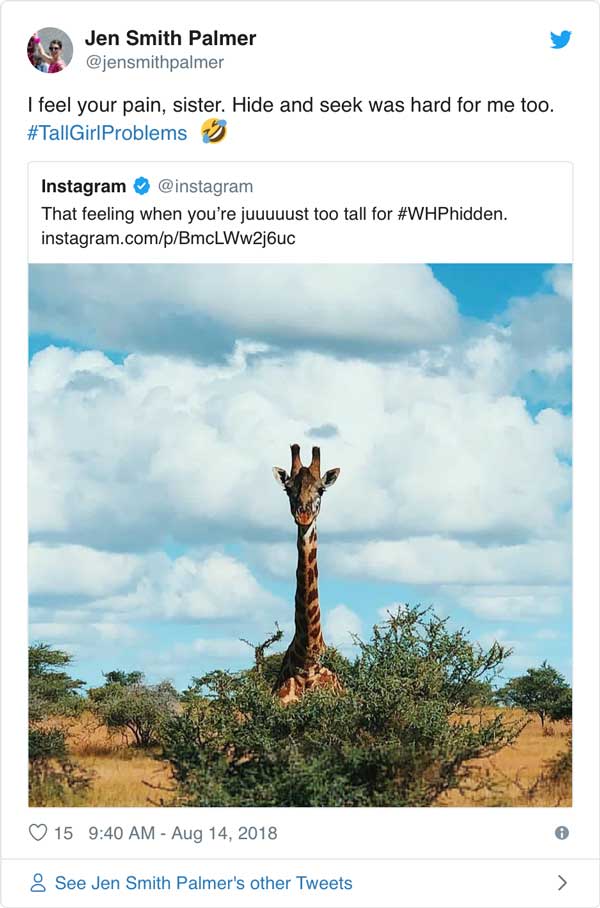