10 Water Related Jokes That You Didn’t Know You Needed

Purgatory is stepping in water in the kitchen but feeling too lazy to get another pair of socks.

1.
My friend Luke didn’t realise until he was an adult that lukewarm was a real temperature, he thought it was just a term his mum used to describe his bath water.
Adam__Melia / Via twitter.com

2.
Water is rly that bit*h. zero calories, hydrating, home for fish, beautiful in nature, etc. like she did NOT have to go that hard. but she did. and i am grateful
skinnyybrat / Via twitter.com

3.
If she showers in hot a*s water chances are she’ll treat you right
Trendingjoey / Via twitter.com

4.
Nothing more humbling than enthusiastically going to glug some water and just pouring it down yourself instead because you’re stupid and a human.
rubyetc / Via twitter.com

5.
How do yalls parents let ur bf/gf stay the night? like my mom get’s mad if i have too many water bottles in my room wtf
confused / Via twitter.com

6.
Yall too old to be saying u don’t like vegetables and water
h0rchataqueen / Via twitter.com

7.
my body: WATER WATER PLEASE
me: you – you want iced coffee??
persianthoughtz / Via twitter.com

8.
Purgatory is stepping in water in the kitchen but feeling too lazy to get another pair of socks
danielhowell / Via twitter.com

9.
Water is a drink whose flavor is it’s temperature
asaddy1 / Via twitter.com 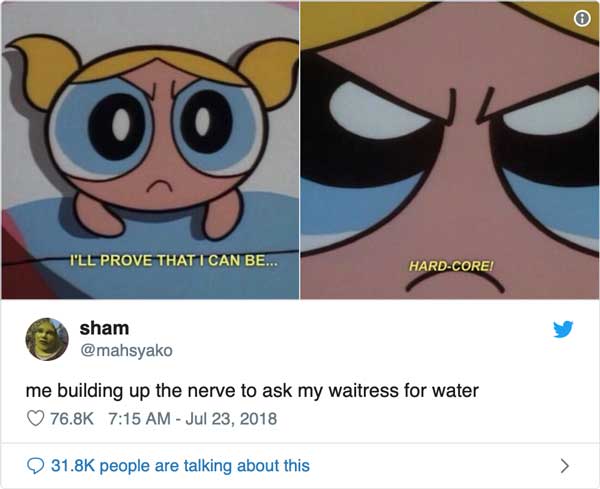