1. On dogs
Yesterday in the park I saw a toddler screaming “BAD DOG” at a goose & I can’t stop thinking about it
fairfairisles / Via twitter.com

2. On cornbread
Almost 2yr old for sale. Been crying for 10 mins cuz he cant get in the oven with the cornbread. Entertaining all offers.
SeauxCocoa / Via twitter.com

3. On sunscreen
Daughter didn’t want “sunscream” so I put her outside and yelled “SUN…. GET HER” and now she’s flipping out.
jacaristar / Via twitter.com

4. On bats
I bought my son a book about bats and halfway through it he shouted out, “WHAT??? BATS ARE REAL?!?!” All this time he thought they were made up for Halloween like ghosts and witches
TragicAllyHere / Via twitter.com

5. On love
*Overheard conversation between 2nd grade boys*
“Do you think you’ll ever fall in love?”
“I don’t know. I think if she likes pancakes, then probably.”
halierb / Via twitter.com

6. On turkey
My 5 year old son just asked “what if we put a slice of turkey in the DVD player and it played a movie about the turkey’s whole life” and none of the parenting books I’ve read have prepared me for this question.
OctopusCaveman / Via twitter.com

7. On Santa
My son sent a letter to Santa. I hope it gets there. It doesn’t have any postage on it and he put it in the bathroom heater vent.
Cheeseboy22 / Via twitter.com

8. On bath bombs
just seen a little girl confidently walk up to a bath bomb in lush and take a bite out of it, kids are class
RachBlackburn_ / Via twitter.com

9. On quesadillas
Madison’s eaten 3/4 of a chicken and cheese quesadilla. The last 1/4 she realizes it has chicken and cheese and isn’t a pancake. She flies into a fit of crying and screaming that I lied and broke her little baby heart.
I literally never fu*king said it was a pancake but go off
kanm03 / Via twitter.com

10. On tattoos
my niece asked me one day why i always wear the same tattoos like LMAOOOOOOOOOOOOOOOOOO
htxraull / Via twitter.com

11. On weight
Today we asked my three year old cousin how much he weighs and he said, “uhhh, like fifty squirrels”
keera_w / Via twitter.com

12. On names
Lifeguard at the lake: “EVERYONE PLEASE EXIT THE WATER, WE’RE LOOKING FOR A 5 YEAR OLD BOY IN BLUE SHORTS NAMED TITUS”
Little boy standing next to me in blue shorts: “hey, my names Titus too”
Jake_5_Bayless / Via twitter.com

13. On oxygen
My son keeps grabbing fists of air and screaming ‘mine’. My daughter is crying saying Tj is stealing my air….they are in my bedroom, on a Saturday morning….
Knowbuntu / Via twitter.com

14. On Twix
My niece asked me to bite into a Twix bar so she could see what was in it, and she refused to eat it because she thought the caramel was cheese
IntroSpecktive / Via twitter.com

15. On lifeguards
I was lifeguarding and a little boy threw his ball out of the water and his mom goes “maybe if you ask the pretty lifeguard she will grab the ball for you!” This kid looked me dead in the eye and goes “…..where’s the pretty one?” KIDS ARE RUTHLESS LMAO
Carlie_Veenhuis / Via twitter.com

16. On owls
I generally think of myself as an okay father but somehow I forgot to teach my two year old son what an owl was and he thought it was called a wood penguin
crookedroads770 / Via twitter.com

17. On percentages
My 13 y.o. son told me that when he hits 99 pounds, he wants to eat one pound of nachos on his own so he can be 1% nacho.
DavidJuurlink / Via twitter.com 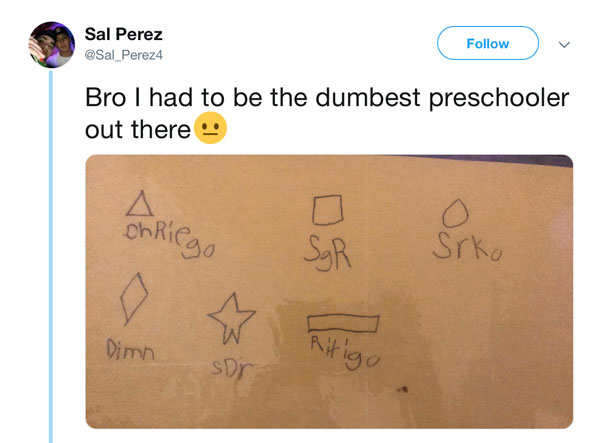 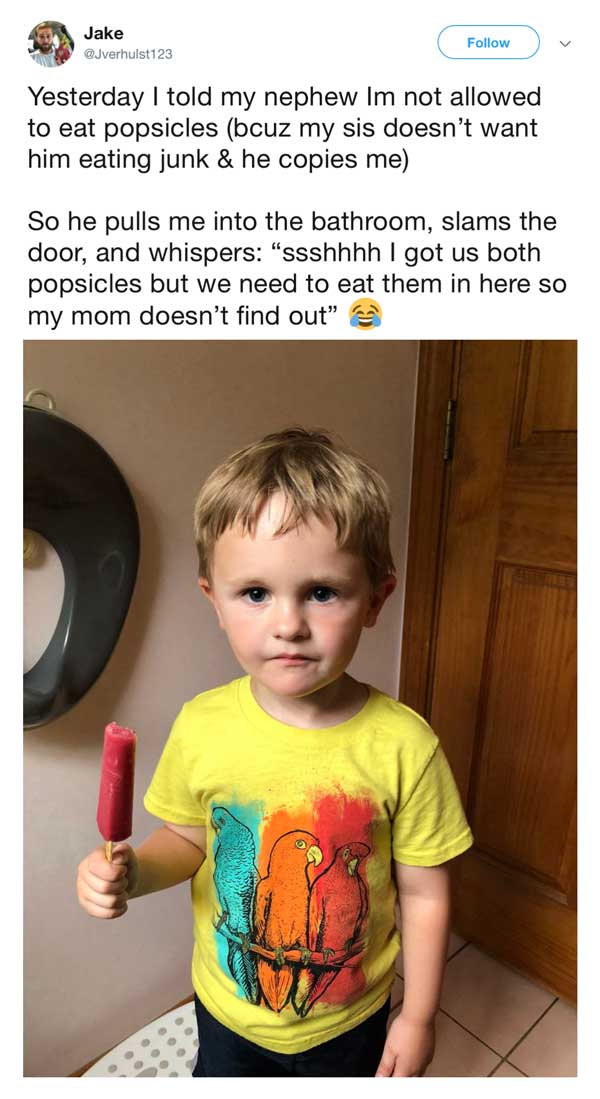