16 Of The Most Creative Cheating Methods That Surprised Teachers

#1
High school kids recreated a Snapple label where the nutrition panel on the back had all the answers, formulas, etc. only got caught because I’d never seen the flavor before and wanted to see how much sugar was in it.
alave / Via reddit.com

#2
One of my old teachers told us a story about a student who had rigged up a tiny scroll of paper in a wristwatch with notes written on it. He turned the scroll by winding the watch.

He ended up getting caught because he was winding his watch so damn much during the exam, but the teacher loved the creativity.
vancouver-duder / Via reddit.com

Everyone in my science class was eventually that kid. Every time there was a quiz, a different person in the class would study.
Pkambhama / Via reddit.com

#4
There was a class that allowed you to bring one sheet of handwritten notes to exams. I knew a guy that created a font of his own handwriting and used to print the entire study guide onto a piece of notebook paper, front and back. He even set the font color to pencil grey and managed to get the margins and spacing exactly right to look like it’d been handwritten.
gmacWV / Via reddit.com 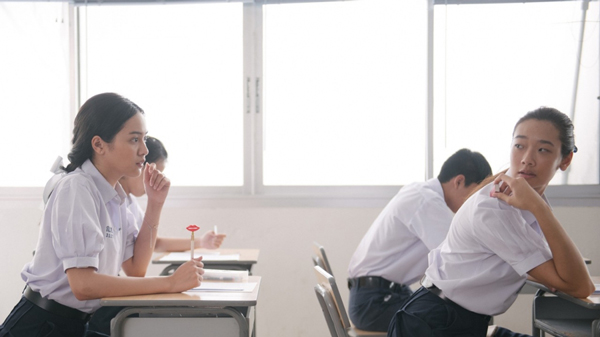 #5
As a student, I remember when my entire year level was accused of cheating, as the test results came back consistently high. What the teachers failed to realise, was that some of the answers were actually hidden in other questions.

So if you got stuck on one question, you could find the answer later on in another question.

An example would be (this was a japanese language test) “What does ___ word mean” and later on, a question would use that word in context, so you would understand what that word meant.
Cont4x / Via reddit.com

#6
Stretch a rubber band around a text book, write whatever you want on it, then when you take it off the textbook, it’ll just look like scribble until you stretch it to see what’s written. Spanish conjugations drove me to do some incredibly unethical things.
MayUseThe****Word / Via reddit.com

#7
I was grading a written assignment that had a 1000 word count minimum and one particular paper just felt really short to me despite word telling me it was roughly 1100 words long. On a hunch I hit CTRL-A and sure enough after the paper concluded there was a lot of white nonsense text on a white background.
Chaps_and_salsa / Via reddit.com

#8
College physics, girl with a really intricate tattoo on her leg wrote formulas in between the tattoo lines. Even looking closely you couldn’t tell unless you knew what you were looking for. You could tell it was test day because she wore shorts.
ScarthMoonblane / Via reddit.com

#9
My teacher shared with us a story about how since she allowed eating during her tests, one person pulled out a giant bag of M&Ms and ate a specific color corresponding to A/B/C/D. It was a two student duo and they only got caught when another student ratted them out.
babydragon0 / Via reddit.com

#10
My exams that used a graphic calculator (TI-84) required us to show the examiners a “proof of reset” screen before the papers started so instead of actually studying for my papers, I painstakingly redrew the “proof of reset” screen pixel by pixel in the TI-84s pixel art program and stored all my notes in it.
Staroze / Via reddit.com

#11
I passed a pop quiz in high school by looking across the room and focusing on the top of the smart girls’ pencil and trying to decipher if she wrote A B C or D after the teacher asked each question. It actually turned out more successful than I thought it would.

Also, I’m all about academic integrity when it comes to important higher education when relative to your field of work but I don’t understand loading immense amounts of needless information into young, hormonal teenagers and getting upset or surprised that they don’t have the mental stamina to deal with it all and would rather cheat
clitclamchowder / Via reddit.com

#12
During a keyboard harmony lab exam (a room with 28 keyboards), one devious student had previously recorded another student’s perfect performance of the exam piece on MIDI .

The cheater played the recorded piece on MIDI, but used all the right hand motions on his keyboard at the back of the room to try to fool me that he was actually playing it in real time.

Unfortunately for him, the student he recorded happened to be my piano student, and I recognized the distinctive playing immediately.

I didn’t embarrass him during class by calling him out on it, but dealt with the problem privately – a lesson he told me later that would stay with him for the remainder of his life.
Back2Bach / Via reddit.com

#13
So, not a teacher, but I witnessed probably the biggest cheating related scandal in our high school’s history.

For context, we had the sweetest old guy as our Chem teacher. He called everyone “Bud” or “Buddy” or “Ma’am”, he always helped, he volunteered to teach Driver’s Ed after school so kids could learn to drive. He always had a twinkle in his eye because he genuinely showed love and kindness to everyone. A side effect of this was that he was very trusting.

So one day, before finals, he ran to the bathroom during class while everyone was wrapping up their lab reports. While he was gone, someone ran to his desk, found the finals just sitting there, snapped a pic, and then ran back to their desk before he got back.

Somehow, no one tattled. Probably because 90% of our grade level in that class was on board with it.

The pictures got texted around, but a few people were smart enough to Bluetooth in to each other so it couldn’t be tracked.

Wellllll after the test, everyone had high scores and apparently someone confessed. This resulted in a huuuuuuuge investigation by the assistant principals, school police officer, and faculty. They traced every text message and busted so many people, all except the ones who transferred via Bluetooth.

They had to re-issue the test. Man that was crazy. I felt so bad for the teacher, he was really sad someone had taken advantage of him and I was too. Such a good dude.
Avinan / Via reddit.com

#14
I was supervising a final chemistry exam along with another coworker. Not 15 minutes in, a hand slams down on a desk and I turn around expecting the worst, only to see my coworker angrily shouting at a pair of really frightened 10th graders whose desk he smashed. Amidst the shouting I caught the words, “Morse code”. The guy proceeded to take them to the office. I called a hallway supervisor to take over and ran after the group.

Apparently, the kids were silently tapping the answers amongst themselves in Morse code. Not even with their fingernails, just their fingertips. I never heard a thing, my coworker happened to catch “B” in Morse code or something. I honestly thought he finally went crazy solely because of his appearance, picture Robin Williams in Jumanji going WHAT YEAR IS IT. I’m 100% sure that if this coworker weren’t in the room, they’d have gotten away with it for sure.
itellteacherstories / Via reddit.com

#15
Not the student but the teacher

So, the teacher, let’s call him Mr. A, had a reputation for being a phenomenal teacher who had every student engaged/invested in his class, no matter how mundane the subject. Any time he asked a question, every student’s hand would shoot in the air with them shouting things like “call on me!” or “I know the answer!”

Simply, Mr. A developed a reputation in the district as one of its best teachers.

Fast forward a couple years and I’m grabbing coffee with Mr. A and I ask him “what’s your trick? How did you get every student bought in?”

His response, “well, I told the kids every time we had a visitor in class, I need you all to raise your hand like I was giving away free candy. BUT if you don’t know the answer raise your left hand. If you do know it, raise your right hand, so I know who to call on and we all look good. Worked like a charm.”
JuiceCastillo / Via reddit.com

#16
I’m a high school teacher, but this story is about my own high school math teacher playing us and “cheating.”

It was an honors algebra/geometry class, and it was well known that Mr D re-used the same questions every year, just changed the numbers. He made a big deal about making sure we all gave our exam papers back to him after we had looked at our scores and gone over everything together to prevent cheating for the next year.

Well, of course, some of my classmates got their hands on a complete set of tests from the previous year. Soon, everyone had a set. Before each exam, we would sit together and make sure we knew how to solve every problem on that test so we could do it on the real exam with different numbers.

Years later, when I became a teacher myself, I saw Mr D at a funeral. I confessed to him that this is what we used to do. He smirked and said “Who do you think leaked the test packet to get you to study?” Mr D had figured out that kids won’t study if the teacher suggests it, but if they think they’re getting away with something, they totally will, so he managed to get a test packet out and circulating as contraband. Blew my mind.
sarahsuebob / Via reddit.com

20 “Dangerous” Dogs Behind “Beware Of Dog” Signs
16 Boyfriends Who Raised The Bar For The Rest Of ‘Em
Do Russians Drink a Lot of Alcohol?
16 College Roommates That I Have Absolutely No Words For