20 Of The Strangest Things That Kids Said To Their Parents

Kids are quite a challenge. And they're also weird.

#1
Just learned our 9y/o did an experiment on us. Lost tooth, told no one for 3d, kept tooth under his pillow. No $. Then he tells us he lost the tooth, next night there is money under his pillow. Then confronted us with his scientific evidence that the tooth fairy isn’t real.
RogueDadMD / Via twitter.com

#2
Random guy: *honks at me for taking too long to pull out of my parking space* MOVE YOUR CAR, LADY!
My 4-year-old: *rolls down her window* HEY!!! YOU CAN’T TELL MY MOM WHAT TO DO! YOU’RE NOT HER KID!
Lhlodder / Via twitter.com

#4
My daugjter just ruined Toy Story for ever. She said if one of the toys died Andy wouldnt know and he’d carry on playing with its corpse
stiggib3 / Via twitter.com

#5
Lifeguard at the lake: “EVERYONE PLEASE EXIT THE WATER, WE’RE LOOKING FOR A 5 YEAR OLD BOY IN BLUE SHORTS NAMED TITUS”
Little boy standing next to me in blue shorts: “hey, my names Titus too”
jake_5_bayless / Via twitter.com

#6
I ask my toddler what’s in the box she’s holding. “chaos!” she replies. “chaos! chaos!” i know she’s trying to say “crayons,” but it’s not like she’s wrong.
rachelle_mandik / Via twitter.com

#7
Me: What do you want to be for Halloween this year?
3yo: Asleep.
Can’t say she’s not mine.
DraggingFeeties / Via twitter.com

#8
I generally think of myself as an okay father but somehow I forgot to teach my two year old son what an owl was and he thought it was called a wood penguin
crookedroads770 / Via twitter.com

#9
I was lifeguarding and a little boy threw his ball out of the water and his mom goes “maybe if you ask the pretty lifeguard she will grab the ball for you!” This kid looked me dead in the eye and goes “…..where’s the pretty one?” KIDS ARE RUTHLESS LMAO
carlie_veenhuis / Via twitter.com 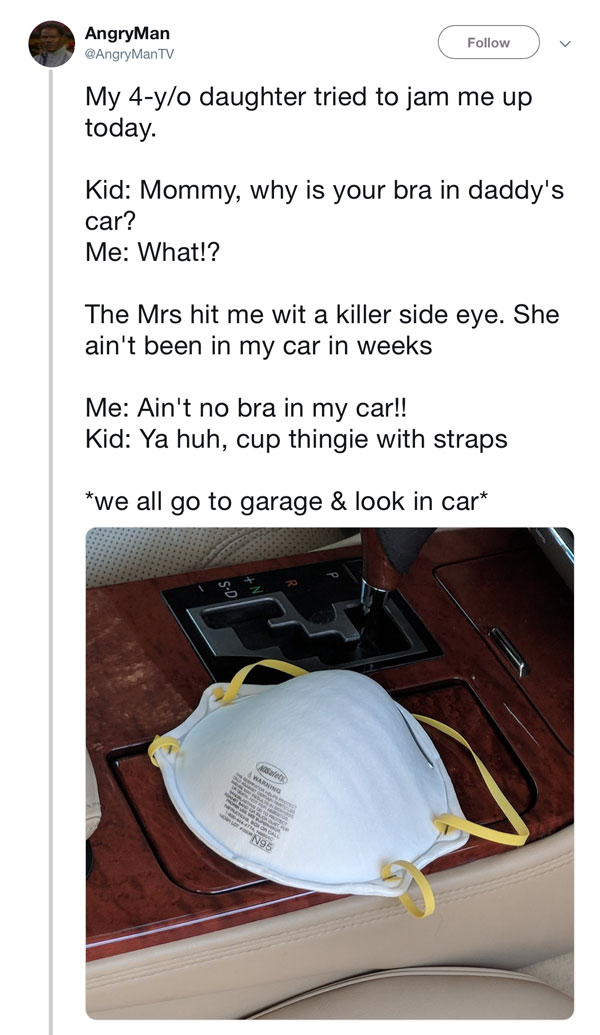 #13
Daughter didn’t want “sunscream” so I put her outside and yelled “SUN…. GET HER” and now she’s flipping out.
jacaristar / Via twitter.com

#15
Today we asked my three year old cousin how much he weighs and he said, “uhhh, like fifty squirrels”
keera_w / Via twitter.com

#16
*Overheard conversation between 2nd grade boys*
“Do you think you’ll ever fall in love?”
“I don’t know. I think if she likes pancakes, then probably.”
hallierb / Via twitter.com

#17
My son is learning to shower:
6: how much shampoo do I use?
Me: the size of a pea.
(Hears pump after pump being shot out of the jug)
Me: how much did you use? Sounds like a lot.
6: have you ever seen how much I p*e in the morning?
Shampoo. Everywhere.
MommyNarrated / Via twitter.com

#18
4-year-old: Why do we have to wear shoes?
Me: They protect your feet.
4: No, they trap your feet. *whispers* They’re feet traps.
Lhlodder / Via twitter.com

#19
The kids I nanny asked why I wanted to see Incredibles 2 and I said because the first one came out when I was a kid
and they really asked ….
If it was in color
kirstenabigail2 / Via twitter.com

#20
My 5 year old son just asked “what if we put a slice of turkey in the DVD player and it played a movie about the turkey’s whole life” and none of the parenting books I’ve read have prepared me for this question.
octopuscaveman / Via twitter.com