#1
I had a kid prior to getting together with my fiancée and having a second daughter. The father of my eldest is not in the picture and my wonderful fiancée has taken her on as his own. To the point that he frequently forgets that she isn’t his genetic offspring.

We were at a holiday party at his parents house. I was talking to my future SIL about my eldest and her night terrors when fiancée pops off with “she gets that from my side of the family…” cue really confused faces all around. His sister sat there and started questioning what other genetic diseases my eldest has magically got from stepdad. It took a few minutes before he figured it out. I love this man…
coffeetish / Via reddit.com

#2
On the phone trying to describe where we are to her parents:
“We are behind the car that’s in front of us.”
I lost it.
Envision06 / Via reddit.com

#3
I’ll answer for my wife. I had gone to Home Depot to pick up a trailer hitch ball for my truck. I didn’t realize that they had different shaft sizes, and I didn’t know which size I needed, so I called my wife and this conversation took place:

Yes. Yes it was. That was how I had gotten to Home Depot. I forgot.
PrimarySearcher / Via reddit.com

#4
In high school, my girlfriend said, “Do you know what I just realized? There’s no state that starts with the letter F!”
We went to school in Florida.
warm_sock / Via reddit.com

#5
Once me and my SO went for a walk around a local nature reserve.

On the way in we got a map given to us so we could navigate the area. Later on the walk she is looking at the map and says to me “these maps really need a ‘you are here’ on them.”

It took me a second to realise what she meant, so I explained that it’s a hand held map and that it wouldn’t be possible, it took 4/5 attempts before it clicked with her.
Yazad / Via reddit.com

#6
My parents have an extremely ugly little dog. Like, this thing is unfortunate. A cross between a Chihuahua and some sort of lesser demon. Buggy eyes, underbite, just ugly. And she picks on my dogs, so she’s not my favorite.

But this little creature adores my husband. One day, he came in to my parents’ house from work (I was already there) and ugly dog runs up to him like she just won the lottery. He scoops her up, laughing, and completely without thinking, he said, “Ticktockmaven, why is it that only the ugly girls like me?”

There was dead silence, and his expression blanched in slow motion. It was like someone looking down and realizing they had sh*t all over the floor. I said nothing, just got up and walked outside, the sounds of his pitiful grovelling following me. “Not you!! I didn’t mean you!! Oh my God, I am so sorry, I didn’t…”

I know he meant nothing by it, but to this day my entire family gives him sh*t for it. He definitely paid for the faux pas, lol.
ticktockmaven / Via reddit.com

#7
My boyfriend as we were looking up at the beautiful night sky.

“Wow, there’s so much we don’t know about the universe. Like where the stars go during the day. Are they still there? If not, where do they go?”.

He was dead serious.
tinbasher97 / Via reddit.com

#8
When my now ex-wife first started dating. I had made a roast for dinner, in my slow cooker. After dinner, she was helping me clean up. I come into the kitchen, and she had the entire crock pot submerged in the sink. I asked what she was doing, and she said she was cleaning it. (She didn’t know that the ceramic inside could be removed to clean).

After I explained that to her, she said, “I guess I shouldn’t have put the whole thing under water!” I said, “No!” And reached over and unplugged it! I have no idea how she didn’t get electrocuted.
Crestwoods / Via reddit.com

#9
My husband and I were at Canadian Tire and they had tiny examples of tents (basically looked like they were made for barbie dolls) and the pricing for each underneath. He turned to me shocked and asked, “why are these so expensive for such tiny tents?!”.

#10
My eldest child was born in December 2004. This was the year that we found out that London had won the bid for the 2012 Olympics.

It was announced that children born on 20/12 would get free entry to the Olympics.

“But what if they’re not any good at sports?”

I had to gently explain that it was free entry to watch the Olympics.
NotoriousREV / Via reddit.com

#11
I asked him to plant a baby tree in the back garden. The next day I saw it and thought it looked strange. Walked up and it had been planted upside down. He thought the roots were tiny limp branches. Laughed for days
goaheadblameitonme / Via reddit.com

#12
Now ex girlfriend from high school. Her power had gone out in the neighboring town. She called crying saying she had so much homework to complete. I said to drive to my house since I still had power. She yelled at me saying “how dare you attempt to get me to drive! How do you expect me to do that… my headlights won’t work!”

It didn’t last much longer after that.
jlancaster26 / Via reddit.com

#13
We were sitting in a bus in the middle of heavy rush hour traffic. I’m kind of a car geek, so I spotted a mint condition 1970s classic Mustang.

I just went and said “Look honey! A car!”

There were hundreds of them.

… I don’t think she’ll let me live this down.
Vakardur / Via reddit.com

#14
One time my husband called me at work, “Babe, you’re gonna be mad, I made a mess but don’t worry I’ll fix it!” I didn’t even ask, just sighed, because he is basically Lucy from I Love Lucy. When I got home a little bit later it was to a living room COVERED in gray powder, my husband completely filthy with a trash bag and broom and a super panicked look on his face. Turned out he’d decided to help around the house and wanted to clean the fireplace, he’d just decided the best way to do it would be to stand in front of it with a trash bag and use the leaf blower to blow the ashes in.

Spoiler – that doesnt work. I didn’t want to hurt his feelings but I laughed my a*s off and it’s still one of my favorite weird things he’s done
awash907 / Via reddit.com 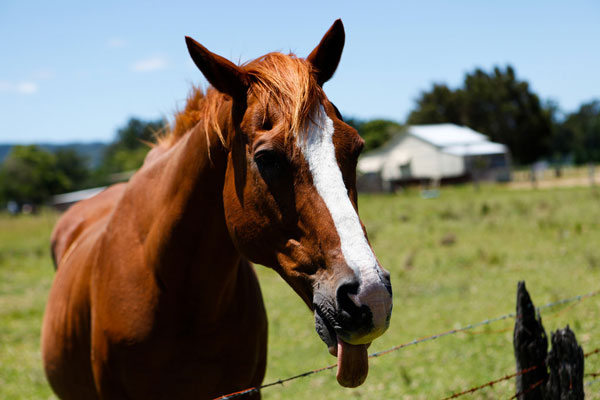 Pavel / Via flickr.com
As we were driving along the road we saw a horse with its head over a gate. We slowed down, she opens the window and says “Mooooooo”.
StingerMcGee / Via reddit.com

#16
My wife couldn’t think of the word “wood,” and told me to clean up my “tree chunks.”
irwinlegends / Via reddit.com

Skinny Mirrors Trick Women Into Buying More Clothes
20 Photos Of America In The 1950’s Show How Different Life Was Before
How much sleep does your sign need?
16 Unbelievable Before & After Transformation Pics From ‘My 600 Lb Life’