18 Tweets About Being A Woman That Are, Unfortunately, All Too Accurate

Another day, another 77 cents.

#1
Welcome to Twitter ladies. A married man, who mainly follows, and interacts with only women, will be assigned to you shortly
THE_shitface / Via twitter.com

#2
boy: i wished girls liked sports
girl: i like sports
boy: oh yeah name the blood type of the seahawks coach from the 1990s
maliagif / Via twitter.com 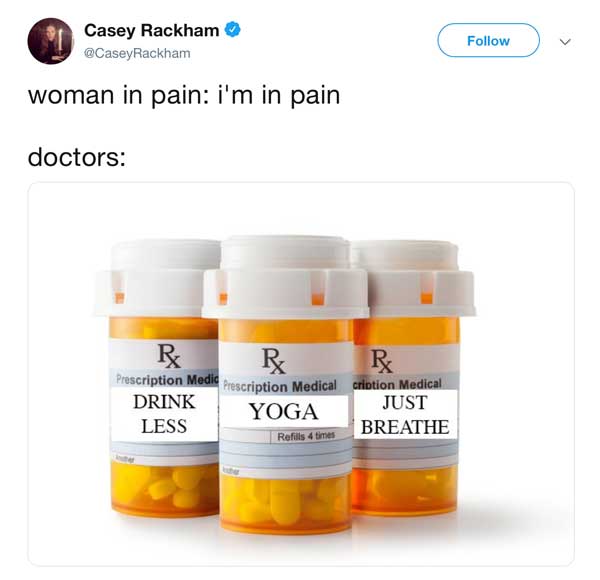 #5
I love when women are having the I Won’t Take My Husband’s Name Because I Already Have My Own Name conversation & a dude pops in with “but you’ve already taken a MAN’S last name from your dad” and like how clever of you to notice that, yes, the patriarchy is literally everywhere
anne_theriault / Via twitter.com

#6
dudes who are saying “it’s scary to hook up with women now, it’s like I don’t know what’s ok and what isn’t”
uhh.. why don’t you ask her? She’s literally right there
AlexisGirlNovak / Via twitter.com

#8
i start pulling up shirt to reveal a tattoo on my belly:
ALLY
*women cheering*
pulling my shirt up further:
ACTU
ALLY
*women groaning*
RUMOKO / Via twitter.com 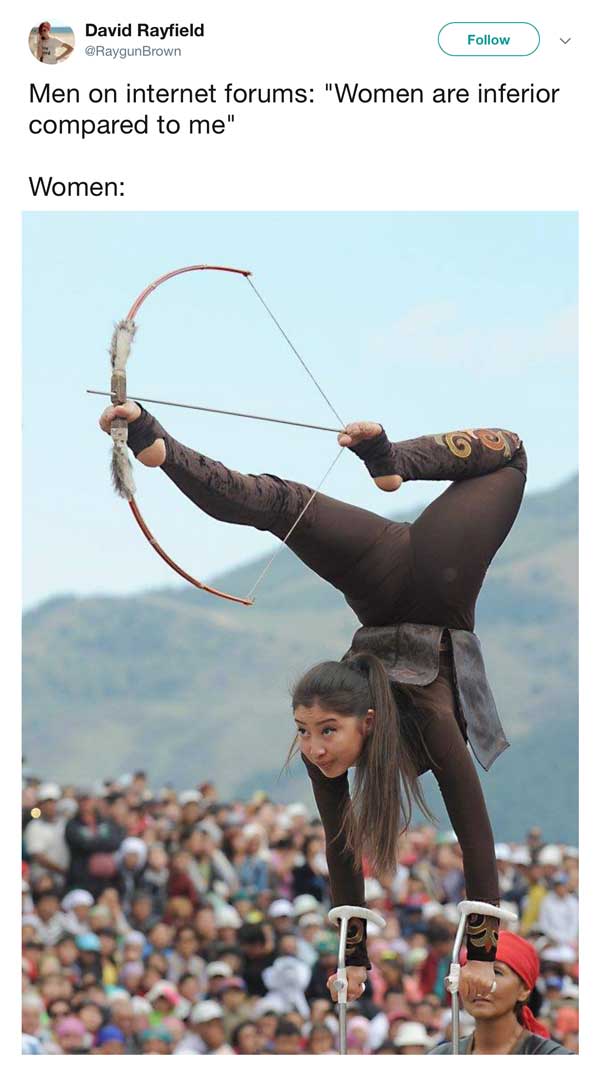 #10
She wears short skirts
I wear t-shirts
She’s cheer captain and
Pop culture demonized the archetype of the pretty blond cheerleader to create a us vs them mentality and rivalry based on subjective comparisons in order to distract teen girls from realizing the true enemy, men
ginadivittorio / Via twitter.com

#11
Men: seriously why do you need such a big bag?????
Also men: can I put this in your bag
DaynaHorton / Via twitter.com

#12
Another day, another 77 cents
PeachCoffin / Via twitter.com

#14
to be honest? guys?? all this “we should assign women to unwashed losers as fu*k objects and kill them if they get abortions” stuff is starting to feel a bit….personal!
monicaheisey / Via twitter.com

#15
A man in the subway tried to hit on me by coming up behind me very close & saying in my ear, “You think the trains going to be late?” but I’d just had dental work done so I turned around & slurred, “No idea” while blood poured out of my mouth. I wish I could do this all the time
clhubes / Via twitter.com

#17
Give a man a fish & he eats for a day, but teach a man to fish & he’ll be like “um actually i know how to fish, i’ll show you” & you wish you had your old fish so you could throw it at him
aparnapkin / Via twitter.com

#18
Every woman I know has been storing anger for years in her body and it’s starting to feel like bees are going to pour out of all of our mouths at the same time.
eekshecried / Via twitter.com