#1 Behind the scenes photo of MGM Intro

A photo of a lion strapped onto a machine in order to make the iconic MGM intro of a lion roaring is actually a photo of a lion being diagnosed at the vet’s office. Luckily, the lion made a wonderful recovery and is now completely healthy. Also, an interesting fact is that there have been 7 lions that were used to create the MGM intro, the current one, who’s name is Leo, has appeared in most of the movies since 1957.
Hai-Kef zoo / Via telegraph.co.uk 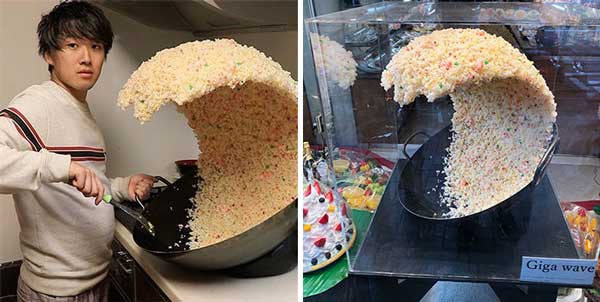 One of the recent viral sensations was the ‘fried rice meme’ that showed a man making an incredible rice wave in his pan. The image quickly received a lot of attention online and people from all around the world starting photoshopping random things into the image. Unfortunately, the photo itself is already fake since the rice wave is a sculpture that is sold in a fake food shop in Tokyo.
NotGAGE534 / Via reddit.com

#3 A kid sleeping near his deceased parents’ graves in Syria

A photo of a kid sleeping near his deceased parents’ grave in Syria turned out to be completely staged since the kid knew the photographer and the graves did not belong to his parents. Although this type of photography is still completely heartbreaking it proves once again you can’t trust everything you see online.
APQW / Via twitter.com 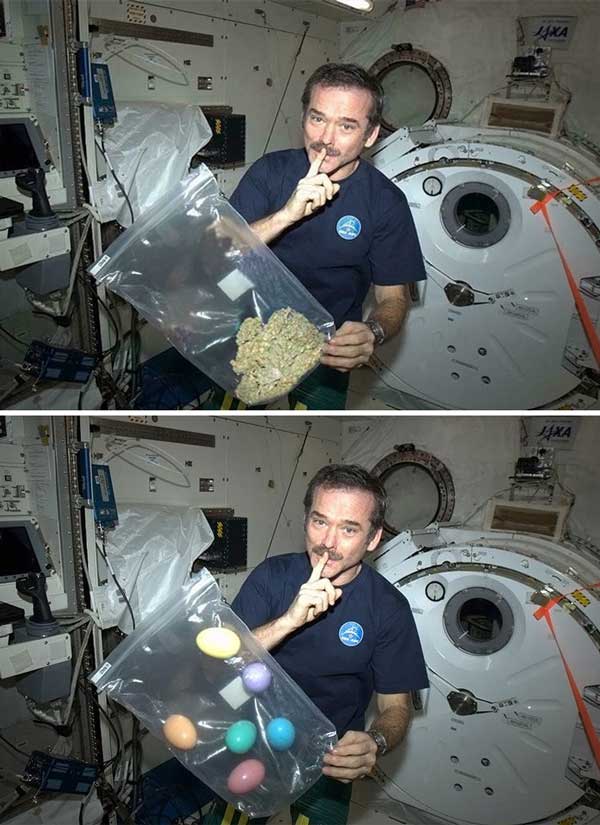 It’s safe to say that Chris Hadfield is one of the most beloved Astronauts there is. His incredible vlogs from space answered so many questions about life in zero gravity, from cleaning your teeth to sleeping, everything is different in space. Although this form of vlogging is very one-of-a-kind, you shouldn’t think that this incredible guy would use any type of drugs while literally flying in space. Chris was actually just trying to surprise his co-workers with some Easter eggs!
Tariq Malik / Via space.com 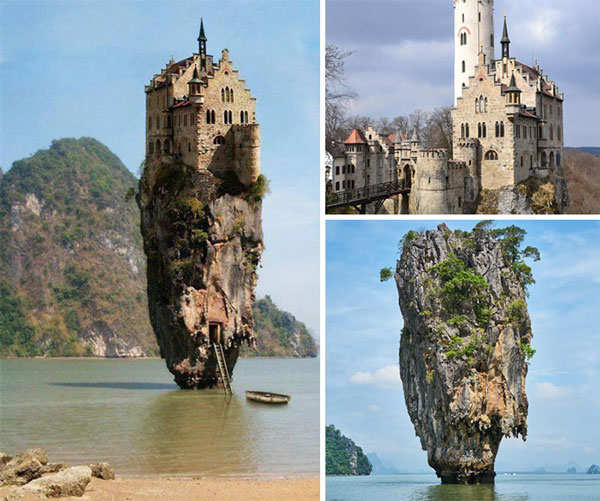 This magical castle that probably most of us would love to visit or even stay in is unfortunately a combination of a photo of a rock in Thailand and a castle in Germany.
unknown / Via boredpanda.com 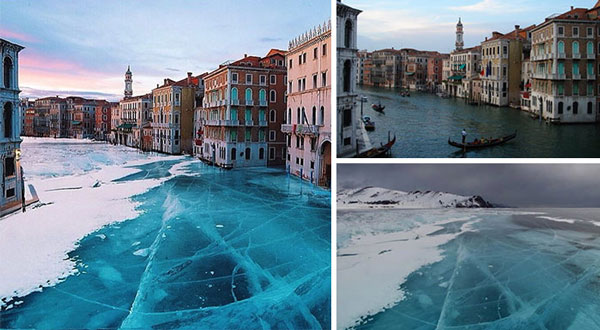 Venice is definitely one of the most beautiful places to visit around the world so there is no need to photoshop a photo of frozen Lake Baikal in Russia to make the place look even more stunning.
unknown / Via boredpanda.com

#7 The mustache wasn’t enough, they had to add those angry eyebrows 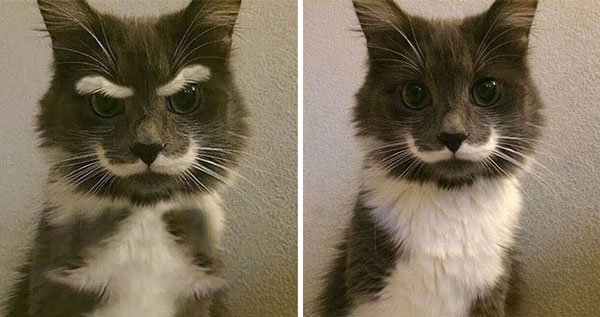 The internet just loves animals, especially if they look weird or cute, or both at the same time. So there is no surprise that a photo of a cat with adorable mustache and eyebrows would go viral. Well, there is a silver lining to this story, the cat does in fact have that incredible mustache.
spanky8520 / Via reddit.com 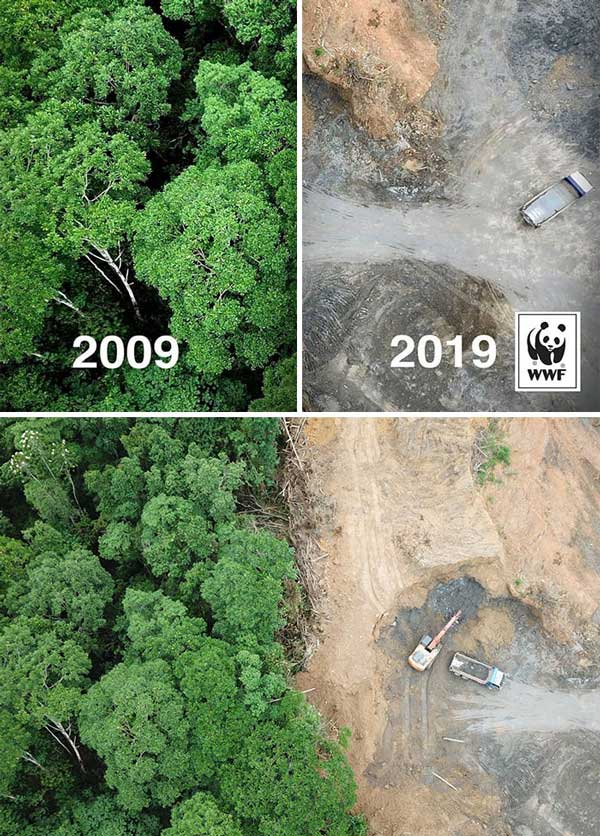 Recently the hashtag #10yearchallenge went viral with people from all around the world sharing their changes throughout the years. Some people decided to use the hashtag to warn people about the terrible impact we are having on this earth. One of the biggest environmental problems in 21st century is deforestation, and that’s exactly what people tried to warn us about. Unfortunately, the image that was used to spread the message was fake – the before and after photos of a rainforest cut down completely was actually the same photo.
carbonconsult / Via twitter.com 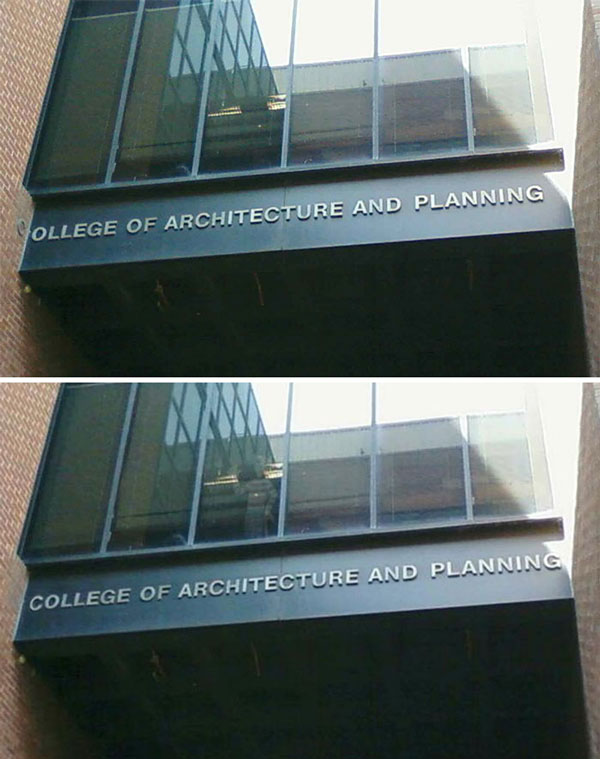 Some time ago this photo was an absolute representation of internet humor, the ironic mistake was something that people constantly shared online. Unfortunately, the photo was photoshopped so well, it wasn’t so easy to understand it was actually fake.
pirateotter / Via imgur.com

Lenticular clouds are already pretty cool as they are, and there is no need for excessive photoshop to make them look better. Unfortunately, the author of the photoshopped version didn’t really think that way. Well, we guess the whole internet didn’t think that way, since the fake photo became a desktop of choice for many people.
unknown / Via boredpanda.com

This iconic selfie of a pilot photographing himself in the air was actually a photo of him when he was safely landed, but it’s important to mention, that even on the land, it’s a pretty cool selfie!
Smallpersonsyndromtothemax / Via imgur.com 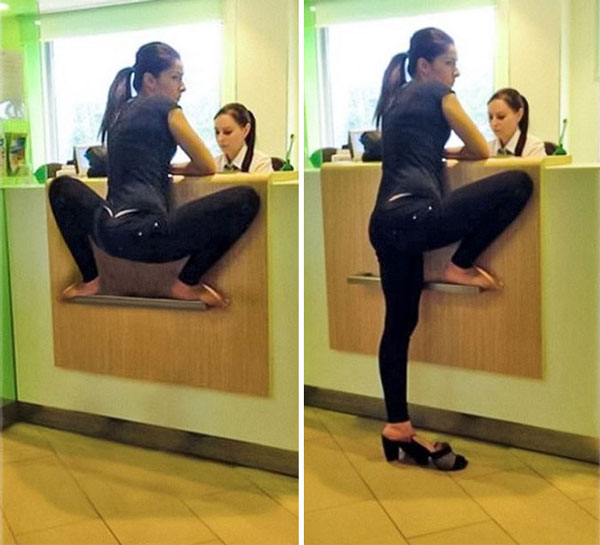 One of the most recent viral sensations was a woman weirdly squatting on a tiny shelf. Turns out she only lifted one leg, which, to be honest, is still kinda weird.
unknown / Via boredpanda.com

If we could make a list of the internet’s most beloved topics, weird animals would definitely have their place in the top 10. It seems that finding weird and unique species is something everyone thrives in, and although it is a cool thing to come across a unique animal, there is no need to create one with photoshop, or if you’re doing so, please do not try to trick people into thinking it actually exists.
pavoldvorsky / Via deviantart.com, Dennis Painting / Via flickr.com

#14 Moon perfectly fitting on a skyscraper 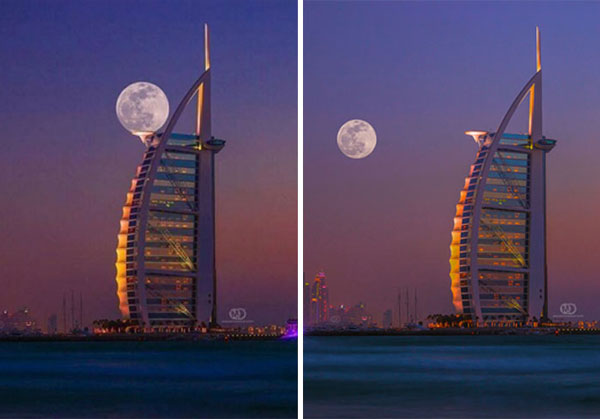 There’s is a weird obsession with moons in viral photos, it seems that if you really want to have a popular photo, just add a moon in the most unrealistic place and there you have it.
AstronomyHD / Via twitter.com, Mo Aoun / Via 500px.com 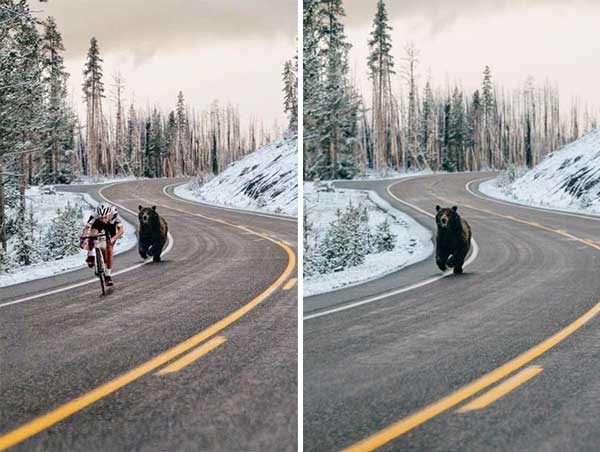 Even though a photo of a bear chasing a cyclist will have a far bigger effect on you than a photo of a bear running through an empty street, luckily, nobody was harmed in the making of this photo. Although there’s not much information about the original photo, it is believed the photo was taken Yellowstone National Park.
adonis-arias / Via tumblr.com 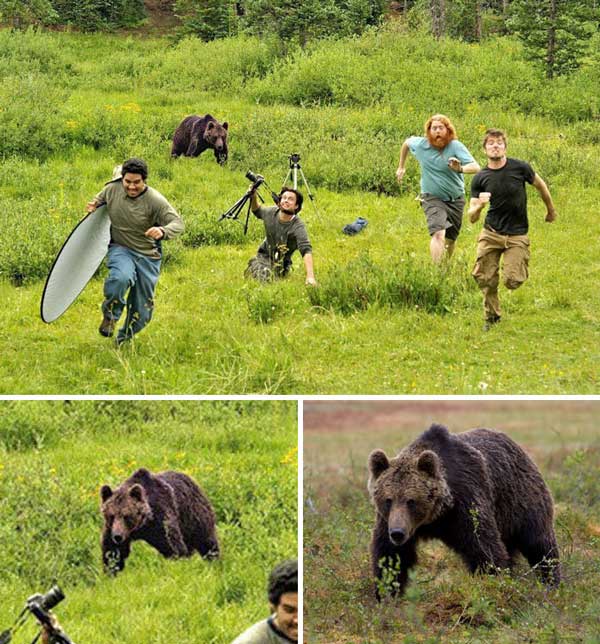 A photo showing a bear chasing a group of National Geographic photographers would send shivers down anyone’s spine. Just imagining being in such a dangerous situation is terrifying. But since we have already proved there’s no point in believing everything you see online, you can stop feeling bad about these photographer,s since the bear in the photo is actually captured in a stock photo that can be easily found online.
EunByuL / Via reddit.com, Juha Soininen / Via freeimages.com

15 Moms Who Probably Had A Worse Mother’s Day Than You
Shooting an assault rifle underwater
The Truth About Chlorine “Pool Smell”
What Are Some Interesting Ways Animals Avoid Predators?