Here are some of the best responses:

#1
NYC Starbucks, 12 years ago, my 1 yr old laughing uncontrollably. Turn around and Robin Williams under a hoodie is making goofy faces at him.
mapninja / Via twitter.com

#2
Long ago biking up in Napa on a brutally hot day a guy pulls over on his motorcycle and asks if we’re ok,do we have enough H2O. Robin Williams.
corieskolnick / Via twitter.com

#3
Keanu Reeves, wearing black sweater, black pants, black shoes, large camera on a strap over his shoulder, walking through the Lower East Side and stopping regularly to take tilted-angle photographs of garbage and graffiti
MC_of_A / Via twitter.com

#4
Adam Driver being sweet to a little boy at a Hudson News in 2017. The kid tried to get his dad’s attention for a while before he wandered over and yelled, “You’re KYLO REN.” Driver knelt down, shook his hand and said, “I’m on a mission from Snoke, so you can call me Adam.”
mcterzakis / Via twitter.com 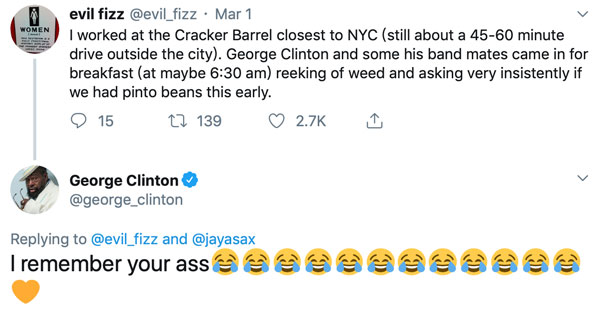 #6
Served David Byrne at a college bar; he wanted coffee and two aspirin, and asked if the tv volume could be increased so he could hear the documentary on African drumming
Lileks / Via twitter.com

#7
Naomi Campbell and Kate Moss shopping in that British grocery store in the West Village with the gate drawn shut, and just laughing.
alexanderchee / Via twitter.com

#8
Mine is also Tracy Morgan: driving a red Maserati very slowly around the Meatpacking District, playing (and singing) Roxxxxxxxaaaaane by The Police at full tilt.
jessaroo / Via twitter.com

#9
Christopher Plummer in an old-timey outfit walking in the park with his dog trotting beside him, off-leash, in perfect heel.
EmilyABroderick / Via twitter.com

#10
Maggie Gyllenhaal and Peter Sarsgaard looking radiant and engaged in no doubt loving conversation in Park Slope while my dog took a giant sh*t outside their house.
lizzieohreally / Via twitter.com

#11
Tom Hanks saying “No more Power Rangers!” to his son in a Pacific Palisades toy store.
dudezilla / Via twitter.com

#12
Sarah Paulson and Holland Taylor waiting in line for the bathroom at a Springsteen concert
natalieayay / Via twitter.com

#13
Camila Cabello in SoHo, shopping. I told her she looked like Camila Cabello and she tried to convinced me she was actually her while I was ignoring her acting like she was joking. Turned out she was indeed and I freaked out.. yeap.
AdriannaMvv / Via twitter.com 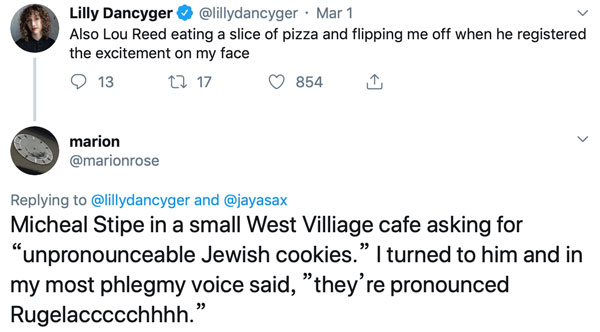 #15
Weird Al Yankovic wandering around a party with a kid sitting on his shoulders. Claire Danes dashing down a West Village block in a strapless white cocktail dress and heels muttering “fu*k fu*k fu*k.”
hels / Via twitter.com

#16
Chris Evans once held the door open for my friend when she had a knee scooter after breaking her foot
GraceFacesPlace / Via twitter.com

Why Do Sunsets On Mars Look Blue?
30 Hilarious Celebrity Parenting Tweets That Show They Have The Same Problems As Everybody Else
14 Things New Parents Want You To Know
Woman Killed over Dowry “Every Hour” in India