Recently, Twitter user WelshDalaiLama asked the internet to give them a time when the customer was totally wrong. Honestly, you’ll feel bad for the employees who had to deal with these people.

#1 This quick learner
I was a butcher and someone rang asking me to break down a whole pig for her. I said ‘Yeah, sure its £30″ then she asked if she could film me doing it on her phone so she wouldnt have to pay in the future. Phone went down pretty quickly
MeirionRoberts2 / Via twitter.com 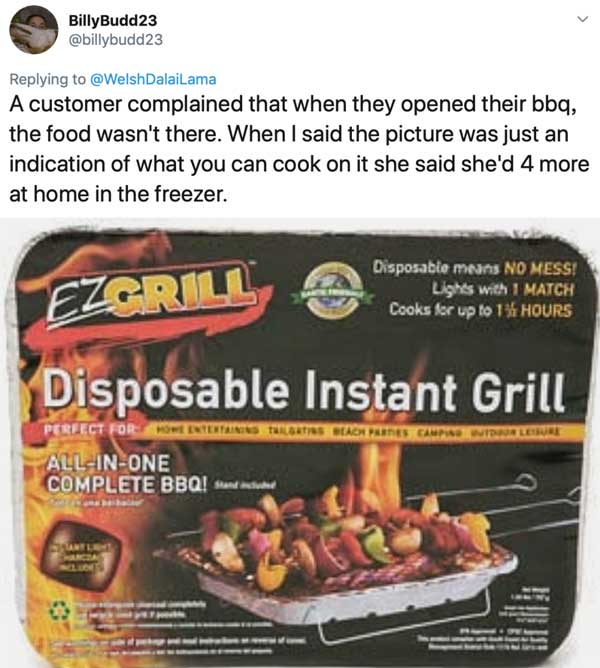 #3 These early birds
Worked in a hotel for a while. Couple tried to check in, I couldn’t find a record of their booking. Bafflement ensued, and obviously it’s my fault we’ve lost the booking. Then they realised they’d turned up a day early.
RhiannonSandy / Via twitter.com

#4 This scone wrecker
I used to work in a tearoom type cafe. A customer sent a scone back to the kitchen, claiming there was too much cream on the scone. The jam and cream was served seperate. He had put it on himself.
sianiellen / Via twitter.com

#5 This noise complaint
Working at Borders there’s a kid going nuts on the bargain books which had noisemakers. After 30 min a woman complains to me about how adults weren’t disciplining their kids correctly. 15 noisy minutes later she decides to confront the kid – which she realized in shock was HERS.
ZacharyLoeser / Via twitter.com

#6 This apologizer
Briefly worked in Co-op on till. Customer argued she’d paid with £20, I’d given her change of £10. Next day she came in and apologised – she’d gone home ranting to her husband and he told her he’d swapped the twenty in her purse for a tenner! Really nice of her, she was mortified
vic_griffiths / Via twitter.com 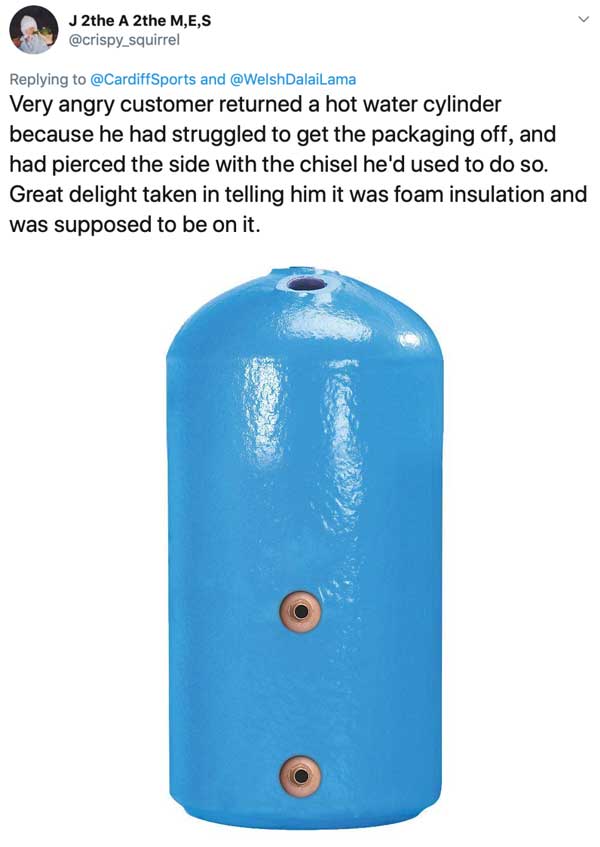 #8 This barista’s nightmare
Customer: I’d like a cappuccino – no chocolate on top, no foam and no milk.
Me: … so you’d like a black coffee?
Customer: No, I only like cappuccino. I WANT a cappuccino!
Me: *makes a black coffee*
Customer: Perfect! I don’t understand why you had to be so difficult about it
lisa_anne9999 / Via twitter.com

#9 This turned-around beauty shopper
Client comes in asking for a specific product. I apologize and let her know we don’t carry that brand. Client flips out, all but calls me stupid. Tells me that she knows EVERY Ulta carries this product.
We were at Sephora
JGrey622 / Via twitter.com

#11 This “odorless killer” sniffer
Got called out because the owner said he could smell carbon monoxide coming from his boiler. Tried to explain. He’s was having none of it.
Huwbut / Via twitter.com

#12 This pizza perfectionist
Too many to recall but probably my favourite is when I brought someone a calzone and when I put it down in front of them seeing their shocked face at the folded dough in front of them as they said “what’s this I ordered a calzone pizza”
Bealeionaire / Via twitter.com

#13 This mixed-up order
Worked in Pizza Hut call centre dealing with complaints. Had a customer scream at me for ten minutes that her local Pizza Hut store didn’t have her order which she placed by phone. The order which, it turns out, she placed with Dominos.
The_Prenna / Via twitter.com

#14 This over-the-phone complainer
Once working at a call centre bloke on the phone told me to “read my lips”
oldrugbygrump62 / Via twitter.com

#15 This chamber of commerce wizard
Had a customer ask if we sell DVDs because she wanted a copy of “Harry Potter and the Chamber Of Commerce”.
Another asked for “The Hounds of Hell” by Kate Bush.
One asked, “Is this record any good?” I replied, “That’s a T shirt sir.”
Pretty much every day in a record shop.
Rhyddian / Via twitter.com

#16 This time teller
Won’t disclose where I worked but basically a customer asked me how long she had left on her promotion & I said, “28 months so that’s a little over 2 years.”
HER: “No, that’s a little more than ONE year.”
ME: “…there are 12 months in a year.”
HER: “No there aren’t.”
leonsabraso / Via twitter.com

#17 These blue microwave bothers
SO MANY but once a couple returned a brand new microwave they just got & started being pissy cuz it was “blue” & they didn’t order a blue microwave. Proceeded to open it in front of them, peel off the plastic cover protecting the whole thing & slid back their silver microwave
OhOlivera / Via twitter.com

I once worked as a banker. A customer railed at me because their debit card wasn’t working.
I investigated, then said,
“Sir, your account is in overdraft.”

He said, “I DIDNT ASK YOU FOR MY ACCOUNT BALANCE, MORON! I WANT TO KNOW WHY MY DAMNED DEBIT CARD WONT WORK!” pic.twitter.com/jZhS5231oR