14 People Who Are Disgraces To The Human Race

i just sneezed and it's only me and my coworker sitting in silence and she didn't say bless you??? excuse me do u even know who i am

Asked my uber driver how long he’s been uber driving and he said “I never started” and then I laughed and then he didn’t laugh & then we rode in silence for 10 minutes and then I sneezed & he said “what was that sound you just made” and I said “a sneeze” & he said “okay”. 5 stars 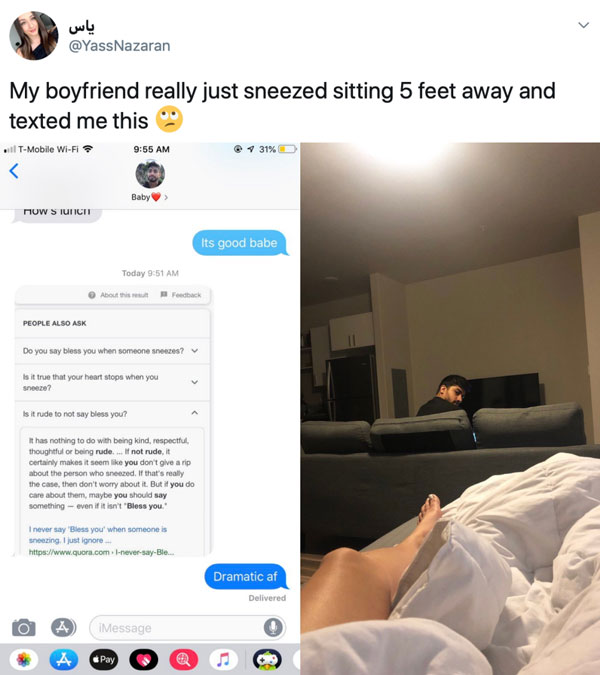 my bf is refusing to say bless u after i sneezed.. taking boyfriend applications

#6 And these classmates too

I just sneezed in class and no one blessed me pic.twitter.com/1MHYuYQKlI

I just sneezed loudly at the car dealership in STL and no one said “God Bless you”. I may never recover from this moment as my hope for mankind is slowly eroding. pic.twitter.com/RMB7ZO7aSa

#8 And these library people too

Just sneezed in the library and no one blessed me. I applaud their dedication to silence but I need blessings in here above most places.

I went an atheist meet-up once and we were discussing an article but then I sneezed and there was just this long, awkward silence.

i just said bless you to this girl who sneezed sitting next to me and she straight up stared at me in silence pic.twitter.com/vPdDyqXQsK

i just sneezed so hard and no one in my family said bless u they all fakepic.twitter.com/3SJKjM8J6n