Parents Are Sharing The Creepiest Things Their Kids Have Ever Said, And I’m Sorry To Do This To You

#1
“I was alone with my 4-year-old daughter when she began staring out a dark window and said, ‘She’s here.’”
dcwinger12 / Via reddit.com

#2
“I overheard a little girl — referring to the new daycare employee — say, ‘Her eyes are pretty. I wanna wear them on my charm bracelet.’”
Lokis_thor-obing_a*s / Via reddit.com

#3
“My husband is a farmer, and late one night I took my 4-year-old and 2-year-old to the field to pick him up from work. Well, while we were waiting for him to finish up, my 2-year-old asked, ‘Mommy, who ‘dat man outside?’ I responded, ‘I don’t see a man — is your Ken doll on the floor?’ Then, my 4-year-old piped up and said, ‘He’s right outside your door, staring at you. He’s scary. He has blood on his face.’ I called my husband, told him to hurry the hell up, and we left. But my girls are now five years old and seven years old, and they still remember that man and refuse to go to that field.”
schuser / Via reddit.com

#4
“One day, the girl I babysat was playing with her dolls, and she ripped the head off of one and put it in a box. I looked inside the box, and there were a whole bunch of stray heads in there. I asked her what she was doing this for and she replied, ‘Practicing.’ I never babysat her again.”
theofficialmistake / Via reddit.com 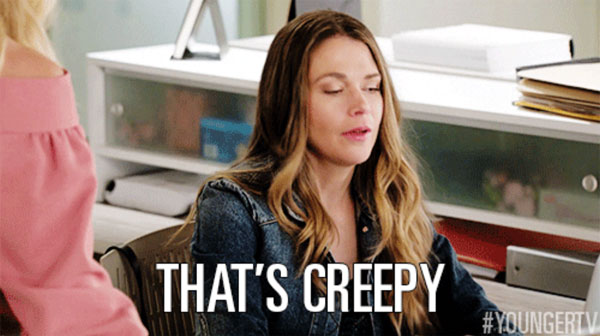 #5
“When my son was five years old, he told me he couldn’t wait for me to die so he could have his own zombie. I’ve slept with one eye open ever since.”
Imgodson / Via reddit.com

#6
“I checked the night-vision video monitor to make sure my 2-year-old daughter was finally asleep since I hadn’t heard any noise in a while, and I saw her standing up in her crib. She then slowly bent all the way over in a way that looked humanly impossible, cocked her head, and said, ‘Hi.’ How did she know I was looking at the monitor at that exact moment?!”
LCarkuff / Via reddit.com

#7
“I was driving my 2-year-old son home one night when he looked at me and said, ‘I am not from here.’ I asked him where he was from, and he explained that our world is a bubble amongst countless other bubbles, and that he was from another one. I don’t even think I said anything in response.”
crayold_lady / Via reddit.com

#8
“Once I was babysitting my 6-year-old cousin, and he was playing with his trains. Well, he started yelling that they were about to crash, then smashed them together. Then, he lifted the parts up, slowly looked at me, and whispered, ‘There were no survivors.’”
kadc123 / Via reddit.com

#9
“One day, my son stared at the corner and asked, ‘Why is that man watching us? And why is his head like this?’ Then he yanked his head at a sharp angle, similar to how a hanging victim would look. Needless to say, it freaked me the fu*k out.”
TheKatyIsAwesome / Via reddit.com

#10
“My best friend was cleaning out her dresser drawers when her 3-year-old picked up a picture and said, ‘Mommy! This was me when I was Grandma!’ It was a picture of my friend’s grandmother. She asked, ‘What?’ And her daughter replied, ‘You don’t remember?! I was Grandma Marie.’ My friend’s grandmother had died a decade before her daughter was born.”
LemonFly4012 / Via reddit.com

#11
“My kid’s friend hit a floating bubble, and it split into two. She said it gave birth, and that it was romantic. Then she suddenly popped them both and said, ‘Murder is more romantic.’”
fatlittleyorkies / Via reddit.com

#12
“I witnessed a 4-year-old girl tell one of her preschool classmates, ‘I’m going to kill your mom…and poop on your grass.’”
theendisneah / Via reddit.com

#13
“When my nephew was five years old, he said he wanted to cut off my head, scoop my brains out, and use my skull to drink out of. He was laughing the entire time.”
oh_look_a_fist / Via reddit.com

#14
“I woke up one morning to my 3-year-old daughter standing over me, staring, and saying, ‘I’ve been waiting for you, Mommy.”
LilMamaSquirt / Via reddit.com

#15
“When my sister was three years old, we were getting ready to go to our uncle’s house for dinner. Well, she was being really fussy, so my dad asked, ‘Don’t you want to go to Uncle Dan’s house?’ She responded, ‘No — I don’t like the man in the ceiling.’ We thought it was an odd thing to say, but didn’t given it much thought…until a few years later, when we discovered that someone had killed himself in the attic back in the 90′s.”
thekkillers / Via reddit.com

#16
“We were on a long drive through western Pennsylvania when my five-year-old said, out of nowhere, ‘This will look really cool as a wasteland. You know, after everyone dies.’”
Aukuumu / Via reddit.com

#18
“My son and I once stood watching my 2-year-old granddaughter looking down my empty hallway, laughing, and chatting away in toddler gibberish. Well, years later, she still sleeps with me when she visits my house because ‘that girl’ scares her.”
TJC528 / Via reddit.com

#19
“When we first moved into our new house, our 4-year-old refused to go upstairs, saying, ‘I don’t want the things upstairs to defeat me!’”
Kindredbond / Via reddit.com

#20
“I was napping on the couch and woke up to see my 3-year-old son standing there with a toy saw, and saying, ‘I’m going to saw mommy’s head off.’ Uhhh…nope.”
1982wasawesome / Via reddit.com

#21
“My parents told me that when I was little, every night before they left my room I would say, ‘Goodnight — don’t die!’”
freakyflow207 / Via reddit.com

#22
“My 4-year-old son went to the bathroom to use the potty and returned seconds later saying, ‘There’s already someone in the bathroom.’ My hair stood up on my neck because only the two of us were home. So I asked him, ‘What do you mean?’ And he repeated, ‘There’s already someone in the bathroom.’ At this point, I pictured a ghost or someone in a hockey goalie mask, so I grabbed the biggest knife I had and told my son to stay there. I slowly and quietly walked into the bathroom toward the shower and pulled back the curtain, but nothing was there. My son emerged from around the corner, and I asked, ‘Where did you see the person?’ And he pointed to an un-flushed toilet and said, ‘See — someone’s already here.’ His big brother hadn’t flushed.”
JohnnyBrillCream / Via reddit.com

Some responses have been edited in length and clarity.

What are the disadvantages of being too nice to people?
Teachers Are Sharing The Funniest Things Their Students Have Ever Said, And I Can’t With The Hilarity
What is the Meaning of D’oh?
The 414 Legs Millipede