17 Times Kids Did Not Give A Hoot About Grownups’ Feelings

#1
Every Father’s Day I think about the time I jokingly asked my 4 year-old daughter if she was going to get me a “World’s Best Dad” mug. “Nope,” she said gravely. “I haven’t met all the dads in the world.”
dorsalstream / Via twitter.com

#2
The kids I nanny asked why I wanted to see Incredibles 2 and I said because the first one came out when I was a kid
and they really asked ….
If it was in color
kirstenabigail2 / Via twitter.com

#3
I was arguing with my husband and my son screamed “yay! TWO christmases!” from the other room.
JennyPentland / Via twitter.com 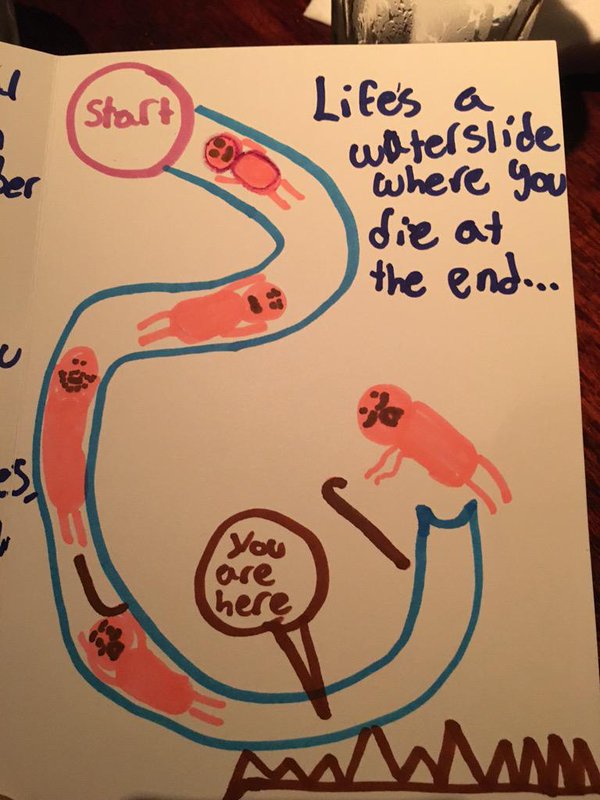 #5
Me: I think I ate too much.
4yo: Yeah, but not just today.
aaroncomedian / Via twitter.com

#6
Me: We all make mistakes.
5: Even you?
Me: Yep
5: Oh yeah! Like when you’re trying to cook food that tastes good but then it doesn’t?
LurkAtHomeMom / Via twitter.com

#7
Me: Please get dressed.
9yo: But you’re still in your pajamas!
Me: I AM dressed.
9yo: Is that what you’re calling [waves palm at me] this?
LetMeStart / Via twitter.com

#9
4: What did I earn for being good today?
Me: My love and affection.
4: [cries] I don’t want that!
ashleyaustrew / Via twitter.com

#10
8yo: I think I just swallowed a fly
10yo: cuz you talk too much
5yo: you shoulda put ketchup on it
turtledumplin / Via twitter.com

#12
Should i be offended my 3yo covers his ears and yells “STOP!” when i dance?
CoxyJindas / Via twitter.com

#13
My 11yo wrote me an apology for misbehaving in the car that included “I love you so much but sometimes forget to care about your existence.”
Manda_like_wine / Via twitter.com

#14
Me: “See this? It’s a fossil of a fish that lived FIFTY MILLION YEARS AGO!” 7yo: “So you were almost born then, right?”
ReasonsMySonCry / Via twitter.com

#15
I’m not saying kids ruin your life, I’m just saying mine told her teacher all about my chin hair.
ashleyaustrew / Via twitter.com

#16
My 7 year old told me his butt is “glorious” and “made in New York.” Also, he learned how to change Netflix profile names.

#17
Me to my son: You remind me of me.
Son: That’s just mean.
JimGaffigan / Via twitter.com

24 Tweets That Expose The So-Called “Tolerant Left”
Speed Draw A Tree
Never ever hit a woman
What Is The Sweetest Thing That Someone Has Ever Said To You?