#1 When you’re at the check out and it sorta feels like a walk of shame:
I hate it when the Target cashier says, “Did you find everything you were looking for?” It makes me feel really guilty. Because I wasn’t looking for any of the 25 items in my shopping cart! I came for diet cokes and toilet paper…
LeighAnneTuohy / Via twitter.com

#2 When you shop there so much that you’re on a first name basis with the employees:
When you go to Target and they say nice to see you again. You know you have a problem.
ZahraPersaud / Via twitter.com

#3 When you’re walking down the aisles and are tempted AF to buy things for the imaginary house you don’t even own yet:
I just spend $44 on Halloween decorations for my nonexistent house.
XtinaMarie2011 / Via twitter.com

#4 Or when you buy things for your wedding, but you’re actually still single AF:
I went to target today and target won, yet again I bought something I didn’t need. I bought “will you be my bridesmaid” cards for my wedding. Btw I’m not even engaged
desirae_alex8 / Via twitter.com

#6 When you strive to one day be the person who goes in for one thing and leaves with that one thing:
I want to grow up one day to be like the girl who just walked out of target with no target bag, just a roll of toilet paper underneath her armpit.
purpleshay / Via twitter.com

#7 When you know that the best way to reward yourself for not overspending at Target is to treat yourself to something(s) at Target:
I actually made it out of target with only the item I went in for, I think I should reward myself. By going to target.
mgruenenfelder / Via twitter.com

#8 When you break your own spending speed records:
I just dropped $90 at Target in less than 20 minutes, before 9am. How is that even possible?!?!
jesslaw / Via twitter.com

#9 When the Dollar Spot ends up not not being a bargain at all:
When you walk into Target and you end up spending $40 in just the $1 & $3 section
asi_soy_yox3 / Via twitter.com

#10 When visiting Target stores while on vacation is as important as seeing the local landmarks:
Does anyone else make a point of going to Target when you’re in other towns just to see if their home section got good stuff that your hometown’s store didn’t? Or is that just me?
KellyFalk / Via twitter.com

#11 When you would have saved money by NOT returning an item:
Everytime I go to Target to return something, I always end up spending twice the amount of my returned items.
soniiiye / Via twitter.com

#12 When your family knows your Target habits too well:
Me: “I got paid yesterday. Do you need me to get you anything while I’m out?”
Grandma: “No, just stay away from Target.”
AimeeJewell13 / Via twitter.com 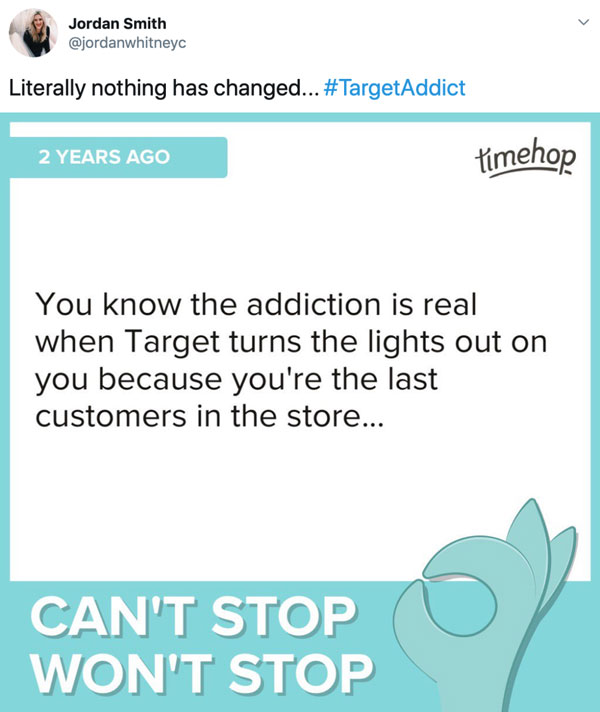 #14 When you know that the sun always shines inside a Target store:
Gorgeous afternoon to be outside.. & yet I have no regrets spending a majority of it inside
KCcbs5az / Via twitter.com

#15 When you need a support team to make sure you don’t fall into the overspending trap while there: 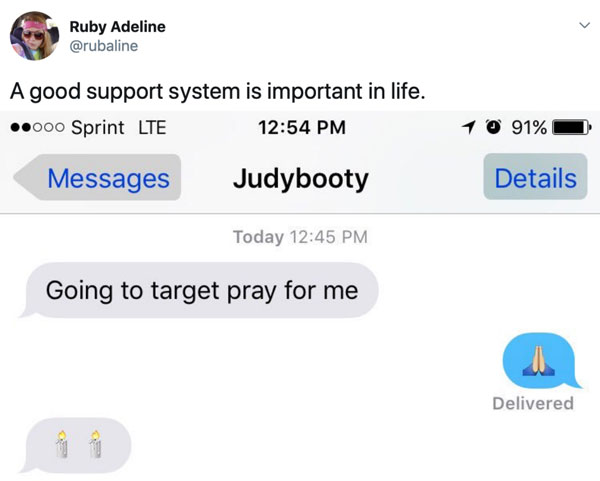 #16 When you walk into a Target and immediately feel like you just went to the gym:
I get an endorphin rush walking into Target every single time!
lily_amelia_bel / Via twitter.com

#18 When you have to go to another Target for an item, and still spend money at both:
Just went to two different Target ‘s to find the shower curtain hooks I wanted. Don’t worry I spent $50 each time
jmfox02 / Via twitter.com

#19 When you buy a bunch of things and forget the ONE thing you needed to go to Target for:
Spent $179.85 at Target, went in for body wash, deodorant, and a toothbrush. Forgot the toothbrush. What the hell did I buy?
KatStark14 / Via twitter.com

#20 And finally, when you love Target because you know they totally get you:
No one:
You: Yeah… I should probably get that, too.
Target / Via twitter.com