16 Super Lazy Girl Tweets That Are Both Hilarious And, Frankly, Aspirational

Quiz: is everything terrible or am I just tired

#1 When you’re just being really honest: 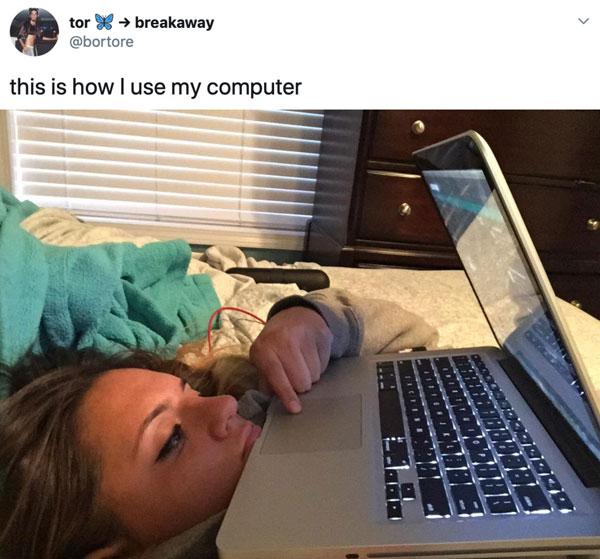 #2 When coming home is actually stressful:
I’m so lazy that i’ve been sitting in my car for an hour avoiding going inside because then i have to make myself food and that sounds like too much of a process
sydnieavery / Via twitter.com

#3 When you have lofty dreams:
There should be a special belt that holds your hot water bottle to your tummy so u can walk around freely just thinking aloud here investors
geekylonglegs / Via twitter.com

#4 When technology turns out to be the best: 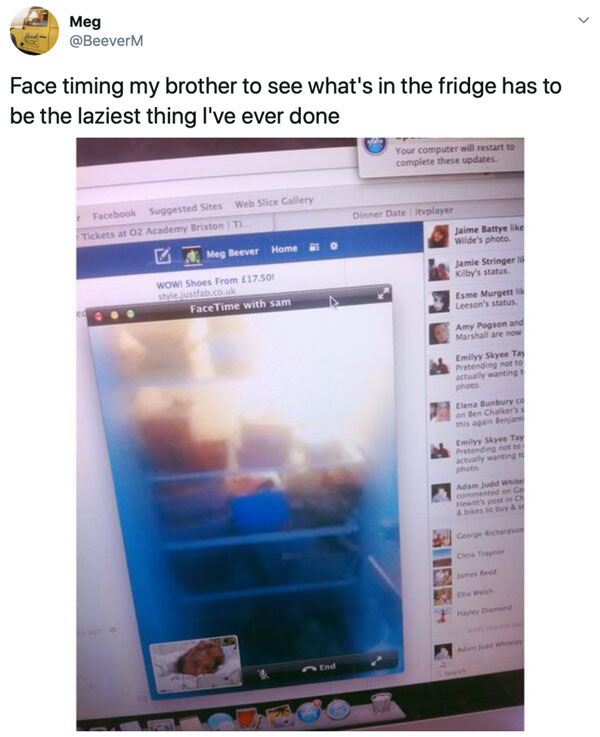 #5 And when technology doesn’t gel well with your laziness:
Autocorrect on my phone has made me so lazy. I type “hrkkp” and get pissed off that it doesn’t get changed to “hello”
GloriaFallon123 / Via twitter.com

#6 When you know how to multitask:
I’m no parenting expert, but one thing I can tell you is to only feed your kids rice on the day you plan to vacuum.
copymama / Via twitter.com

#7 When you question why you have no energy:
Quiz: is everything terrible or am I just tired
karencheee / Via twitter.com

#8 When the tiniest amount of effort feels like A LOT:
Me going to the gym two days in a row: wow can’t believe i’m the fittest person alive
ledbettercarly / Via twitter.com

#9 And when you know you’re not the ONLY one:
I know a kindred spirit when I see one (someone sitting completely still on a weight machine and sincerely watching Pirates of the Caribbean on the gym tv)
audipenny / Via twitter.com

#10 When helping yourself is not even helpful:
Me: *reads all the self-help books*
Also Me: *never helps myself*
Kendragarden / Via twitter.com

#11 When you honestly just can’t remember things sometimes:
“Did I put deodorant on?”
- Me six times a day
SardonicTart / Via twitter.com

#12 When everyday things are just so overwhelming:
Can you die from having too many passwords to remember
House_Feminist / Via twitter.com

#13 When you’re not even that bothered by a little mess:
I didn’t mean to like your selfie I was just trying to get dried salsa off my phone.
jackiembouvier / Via twitter.com

#14 When you FINALLY get around to doing that one thing you meant to do years ago:
Just finished an article link I bookmarked in 2005, and uh yeah, I have some questions
aparnapkin / Via twitter.com

#15 When leaving your bed just isn’t an option: 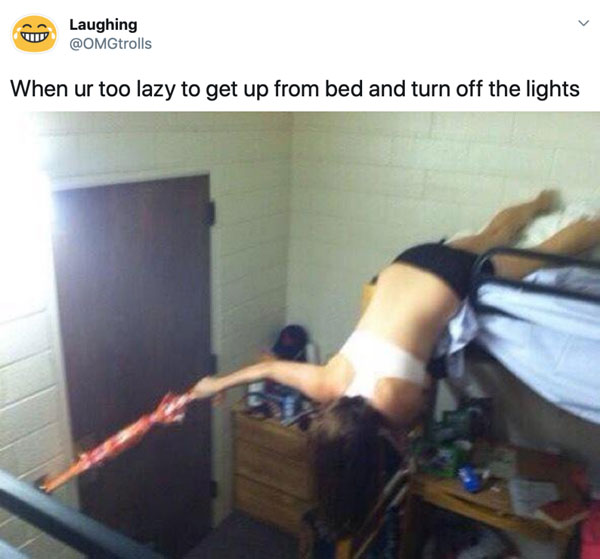 #16 When cleaning the house is, like, your last priority:
On HGTV they can flip a house in a month and I’ve been “getting ready to dust” for the past two weeks.
AbbyHasIssues / Via twitter.com

And finally, when you’re so lazy you actually get into accidents while simply lying down:
Punched myself in the face while pulling up my covers if you were looking for a goddess in the bedroom
Mom_Overboard / Via twitter.com