18 Hilariously Broken Dads Who Have No Dignity Left

#1
Just overheard my 6-year-old son ask Alexa, “Alexa, is there anyone my dad could beat up?”
Cheeseboy22 / Via twitter.com

#2
I became a father the day my daughter was born but I didn’t become a dad until the first time she rolled her eyes at me.
TheCatWhisprer / Via twitter.com

#5
One thing the parenting books didn’t prepare me for is having to bring home a 200-pack of toilet paper every 48 hours
thedad / Via twitter.com

#6
Wife: Honey why do you always wear that one old tee shirt around the house? The neck is all stretched out.
10 month old: *grabs my tee shirt neck, hauls herself up, starts slapping my face and giggling*
Wife: …yes yes I see
DaveLearnsToDad / Via twitter.com

#7
Having a 3yr old around is a bit like having the director’s commentary turned on for the movie that is your life.
Except the director thinks you’re a sh*tty actor and likes pointing that out.
DaddingAround / Via twitter.com

#8
3-year-old: *holds the remote for 2.5 seconds*
Me: *spends hours trying to get Netflix to not be in French*
XplodingUnicorn / Via twitter.com 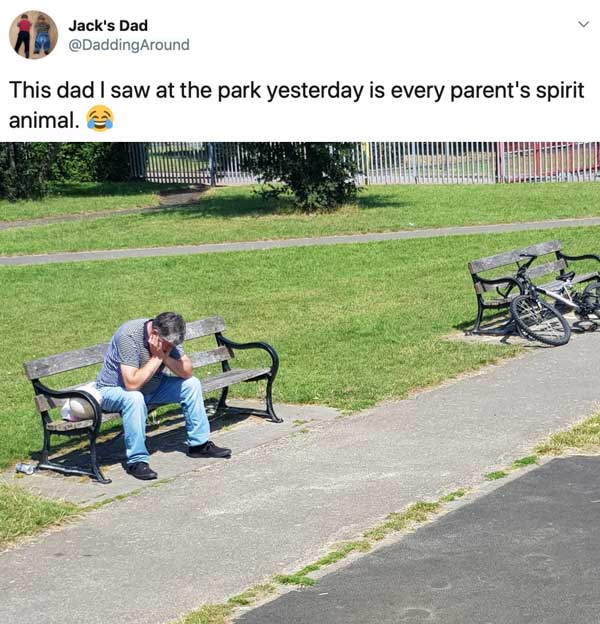 #10
Accidentally asked a conference room full of coworkers if they had to go potty before the meeting and my membership to the Parent Club auto-renewed itself.
TheCatWhisprer / Via twitter.com

#11
Just asked my 7 y.o. if I could be the person who chooses the hangman word and she said, “no. You already had your childhood.”
djgoor / Via twitter.com

#13
My 4yo asked why she couldn’t see the moon. I explained the moon’s placement in the sky and Earth rotation. Midway through my impromptu lecture, I heard her softly singing the finger family song. I stopped talking, she kept singing. I never answered her questions again.
LaGuardiaCross / Via twitter.com

#14
Me: I wonder what delights the world of parenting will offer me today?
My 6yo kid: [rubbing toothpaste over his hands as if it’s hand cream]
geowizzacist / Via twitter.com

#15
Welcome to parenting, now all of your hoodies have spare napkins in them
FatherWithTwins / Via twitter.com

#16
Toddlers indoors:
Bounce off walls with relentless, destructive force.
Toddlers at playground:
Sit motionless on the swings screaming “HIGHER!!!” until both your arms, and will to live, are broken.
dad_on_my_feet / Via twitter.com

#17
I thought it would be cute to teach my toddler my first name. Now that he wakes me by screaming it in my face I can admit how very wrong I was.
daddydoubts / Via twitter.com

#19
I never realized how annoying I could be until I created a miniature version of myself and started arguing with it daily.
ParentalGrit / Via twitter.com

What Percentage of the World Drives on the Left Side?
When Did We Start Using Straws?
What Is The Proper Response To Having Your Butt Slapped By A Stranger In Public?
Kaley Cuoco: Maxim Cover Shoot