#1
Just bought 50 boxes of animal crackers and a kayak.
I hate you Costco.
L0rdTrash / Via twitter.com

#2
Currently in line at costco fantasizing about their sexy luscious 700 calorie per slice pizza melting my arteries or whatever
JAKEGRNR / Via twitter.com

#4
Me: I love this Airbnb
Costco employee: please leave I won’t ask you again
savittj / Via twitter.com

#5
Sometimes I wish I could have lived in medieval Europe, but then I imagine galloping home from Costco with 20 bottles of BBQ sauce and nope.
LoveNLunchmeat / Via twitter.com

#6
One day, you’re partying until the morning hours and then suddenly you’re excited about the new Costco that’s so much closer than the other one.
PinkCamoTO / Via twitter.com

#8
“You like mayonnaise? Prove it.” – Costco
seethenare / Via twitter.com

#9
My husband has forbidden me to go to Costco when I’m hungry. I don’t understand. How hard is it to eat 47 rotisserie chickens?
sixfootcandy / Via twitter.com

#10
Went to Costco for paper towels and bought the Cleveland Browns and a helicopter.
CelebrityChez / Via twitter.com

#11
Every time the Costco parking lot isn’t over-crowded, I get nervous that I missed the rapture.
ThisOneSayz / Via twitter.com 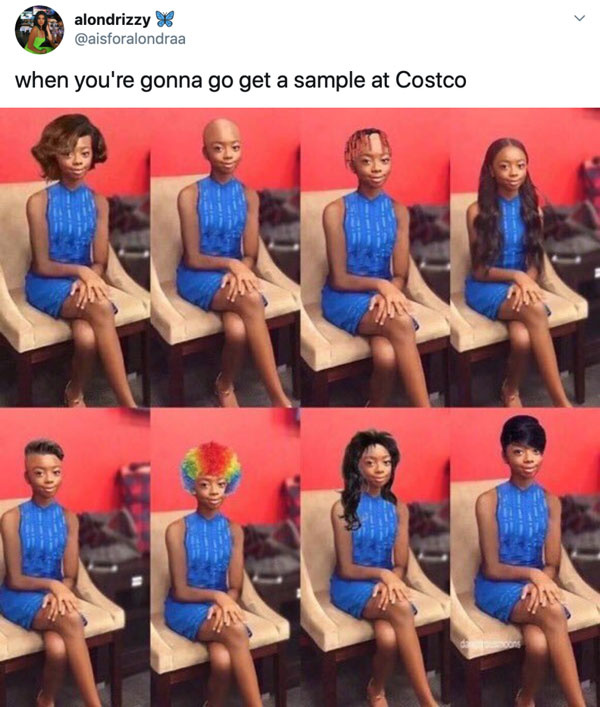 #14
Costco is my Hotel California.
ThisOneSayz / Via twitter.com

#15
I like when you’re at Costco and there are about 15 adults lined up for half a chicken nugget
thepinksinger15 / Via twitter.com

#16
Almost have my wife on board with sending out a christmas card that’s a photo of our family in front of costco
dlicj / Via twitter.com

#19
Made the mistake of going to Costco after drinking a half bottle of wine & now I’m the proud owner of everything.
Except tires.
sarcasticmommy4 / Via twitter.com

18 Times J. K. Rowling Brutally Destroyed Internet Trolls
20 Tweets That Will Make You Say “Wow, Did I Write That?”
15 Knockoff Food Brands That Are Doing Hilariously Bad Impressions
Which Country in EU Has the Largest Population?