#1 This server who served this iconic line:
So today I got tipped 78 cents on a $125 bill and I actually ran after the guys and gave them the change back and said “You need this more than me apparently”
LOL @ MY LIFE
kenn_ahh / Via twitter.com

#2 And this legend who did this:
So today I waited on these people who were beyond rude & their bill was $80 & they left me a $2 tip
Lol so me being me, I went up to them with the $2 & said “you clearly need this more than I do” & gave it back to them.
Respect your servers people
flickoftheriss / Via twitter.com

#3 This server who called out the bad tipper in front of everyone:
Some young kween tipped me .99 cents and had the biggest smile when I realized it was all in change. I was so pissed I chased the little bit*h down and told him he forgot his change in front of everyone. .99 isn’t a tip it’s an insult. PERIOD.
Obsidiandemon1 / Via twitter.com

#4 This server who returned the tip:
My friend was tipped two cents once. She chased the couple down and gave it back to them.
partlycara / Via twitter.com

#5 This server who texted the guy (who left his number) and called him out: 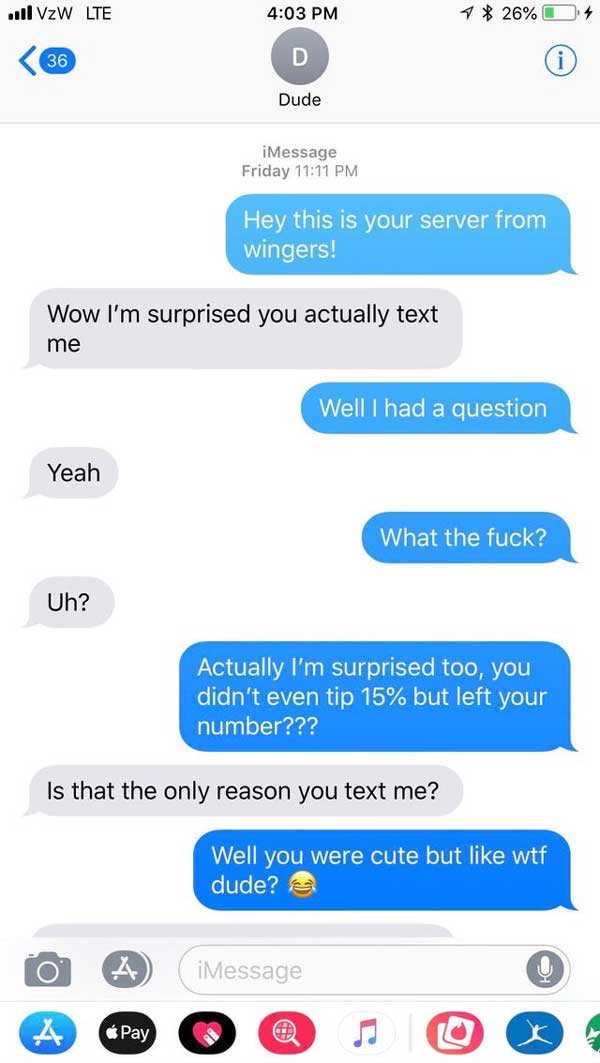 #6 This server who returned the exact change:
My second to last day at my current job so I’m feeling ultra petty. My table left me a $2.25 tip on 200 and said no change. I chased them on their way out to give them their exact change back cause honey u need it more than i do don’t spend it all in one place
chill_syl / Via twitter.com

#7 This server who did the “return it, smile, and walk away” technique:
My last table. A couple & a baby; said i was so nice and everything was perfect….tipped me 72 cents.i gave it back & said “thats ok…you keep it” & smiled & walked away.
laurena_x0 / Via twitter.com

#8 This server who had a great comeback:
This bit*h literally had the audacity to tell me she was in the biz, so i had her food discounted … then she payed her tab… left me a 5% tip on the discounted final amount… and then asked me if I make good money here
I literally said, yeah when people tip me correctly :-)
thesteezyshark / Via twitter.com

#9 This person who threw the change at the bad tipper:
One time this lady left me a tip of hella quarters yo. Hella fu*king quarters. Her EXTRA a*s left a note that said “Be faster next time”
She had just walked out the door so I came out behind her and threw the quarters back at her lmao my manager was not pleased
DontKERAboutyou / Via twitter.com

#10 This guy who wanted a tip, not this weird moment:
Y’all ain’t gonna believe this. Today at work a dude left me a tip that said “meet me outback”….. so i go out back thinking the money is in the car. NOPE. Turns out I was just his type. Hell naaaaaaaaaaa ill take the money lol
notAburnertweet / Via twitter.com

#11 This server who gave this couple the sarcastic treatment:
I waited on a couple who left me $0 on a $50 bill tonight so I chased them out of the restaurant to “kindly” thank them for their generous tip :-)) (also they were really freaking rude & disrespectful so fuk them)
burritoxo / Via twitter.com

#12 To change up the pace, here’s an uplifting story.
Yo I helped this table a couple days ago who left no tip and yesterday these 2 girls came into my work and said “we came with our guy friends a couple days ago and they didn’t leave a tip-we felt bad bc you were really nice so here’s $20”
WOMEN>MEN
imjaclyn / Via twitter.com