Only the essentials in here.

#2 You’ll never know what to eat:
Who knew the the most taxing part of being an adult is trying to figure out what the fu*k to have for dinner every goddamn night until you die
urbanhymnal / Via twitter.com

#3 Always be ready to drop $20:
As an adult, you got to be ready to spend $20+ every day just miscellaneously.
mellowroyalty / Via twitter.com 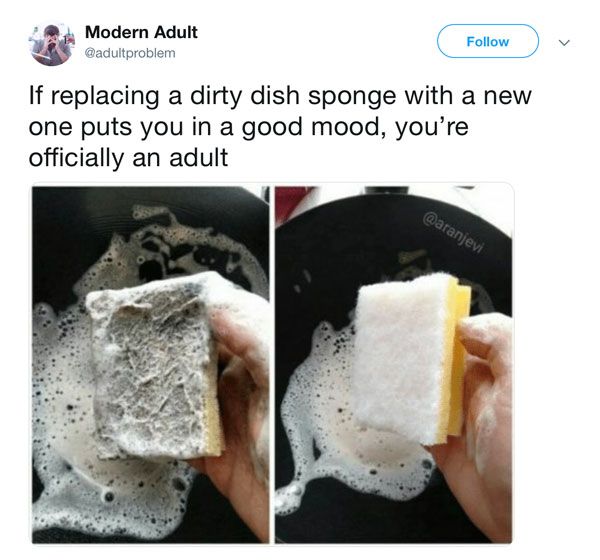 #6 The grocery store is out of its mind:
Peak adulting is when you start using the phrase “they done lost their damn mind” regarding prices at the grocery store
Mariannoo / Via twitter.com

#7 Mail is terrifying:
I remember the way I used to get excited whenever I received a letter addressed to me when I was younger but every time I receive one now I think “fu*king what now”
lolzysz / Via twitter.com

#8 Your 2nd grade self was out of control:
At 25 I pictured myself married with 2 kids….bro what was I smoking in the 2nd grade
fivefourthor / Via twitter.com

#9 You got to be ready for the avalanche:
You’re not an adult until you have a cabinet full of Tupperware and every time you open it they all spill out and you can never find a matching lid for the one you want to use.
cowhitchurch / Via twitter.com

#10 Exclamations are key:
Adult email culture is ending every sentence with an exclamation point, then proofreading to see how many is socially acceptable to keep.
springrooove / Via twitter.com

#16 You’re always on the verge:
Best parts about being an adult:
-fierce trust issues
-always anxious about something but can rarely pinpoint what
-constantly on the verge of a sinus infection
-wait no
sarafcarter / Via twitter.com

#18 It’s a lot like being stuck upside down:
Remember as a kid when you would get stuck upside down and start freaking out and crying because you thought you’d never get out? Yeah, that’s pretty much every day of adulthood.
lous_change / Via twitter.com

#19 And it never ends:
I just cannot believe I have to be an adult for the rest of my life
HopeRehak / Via twitter.com