16 High Schoolers Who Are Honestly Living Their Best Lives 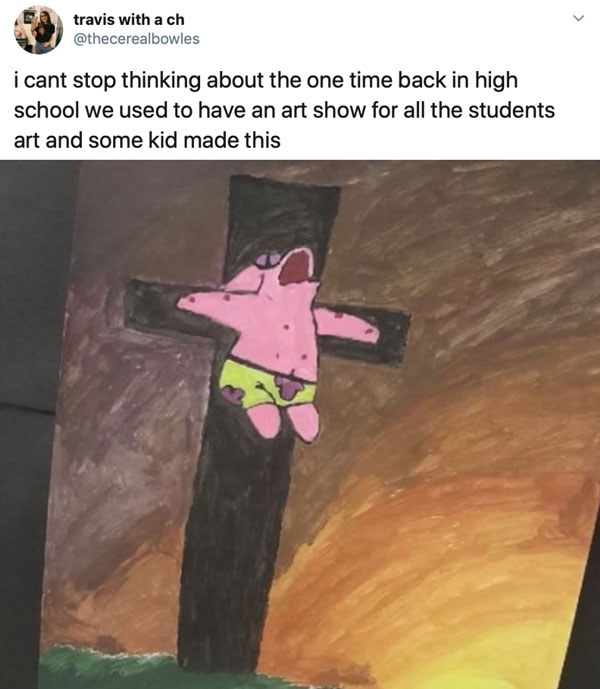 #2
One time during a high school cross country meet i pretended to faint .5 miles in because i was tired and the medics came and carried me to a golf cart and i’ve kept this to myself for 4 years- AND THAT’S SHOWBIZ, BABY.
brett_neusty / Via twitter.com

#3
I wonder why my parents hate me and then i remember that in highschool i hit someone’s car with a golf cart and was scared of getting in trouble so i pretended to be dead. was rushed to the hospital in an ambulance. people were crying. i didn’t have a scratch.
maddzcat / Via twitter.com

#4
There was once a girl in my high school who filled a Dunkin’ Donuts cup with a Loko and got so drunk DURING SCHOOL HOURS she pi*sed herself in Spanish class u may think people forget the story Jackie but I can assure you they!!! do!!!! not!!!
ballerguy / Via twitter.com

#5
I will never forget the time my high school principal read my tweets to me because I was ruining the schools reputation…
Hearing her quote me saying “I will shove a toaster up my a*s” and “im gonna twerk my a*s if they cancel school” out loud to my face will haunt me forever
Drewphillips__ / Via twitter.com

#6
My high school had a $10 fine for swearing on campus. one time a kid got caught saying ‘sh*t’ during gym. when the principal told him to pay up, he handed him a twenty and said keep the fu*kin change.
jazz_inmypants / Via twitter.com

#7
Once when I was 15 I told this hot a*s older man I was 19 and in college and then the next weekend he was my referee for my JV high school basketball game
jhutt222 / Via twitter.com

#8
One time in high school I got so excited my crush talked to me in class that I went in the hallway and threw up. Walked home 5 miles I was so embarrassed. I told him about that in college and he said “I know. The entire class saw thru the window next to the door.” Omfg
SJSchauer / Via twitter.com

#9
One time in high school I tweeted about how our football team su*ked and then the athletic program made me write an apology letter to the football team
tessapaisan / Via twitter.com

#10
Some kid in the library is bragging loudly about how he got a 35 on the ACT well sir I signed up for the ACT but forgot I did and missed the test and we still ended up at the same school how does that make you feel
sydneyleemarco / Via twitter.com

#11
Lmaooo one time in high school i snuck in my bf and my mom decided to be sick for 4 days and i could not sneak him back out so i had him hidden in my closet and had to feed him oreos….. for FOUR DAYS
xamanthaaa / Via twitter.com

#12
One time in high school I got bored & purposely crashed my car into a snow bank just so the boy I liked would come pull me out with his truck. I am ashamed, but this has been weighing on me for 4 years. thanks for listening.
_clairejoelle_ / Via twitter.com

#13
I’d say I peaked in high school, only because one time I was running away from a Spirit Day assembly to go home & draw, & this teacher I’d never seen caught me & said “WHERE ARE YOU GOING?” & I said “Do you know who I am?” & she said “no.” So I sprinted away and never got caught.
little__tunny / Via twitter.com

#14
One time in high school my brother took my car and CRASHED it, got it fixed and put it back in the driveway all within my 6hr school day and he kept it a secret for 4 years!!! i think that’s the most sibling thing ever
jrtyszka / Via twitter.com

#15
One time in high school this girl pulled out her lunch in class and starting eating it and the teacher said nothing so i was like wow fun me too and i pulled out a sandwich and before i even took a bite i got yelled at and everyone laughed. I still think about it a lot
RickyPDillon / Via twitter.com

#16
One time in high school I wrote an essay about pretty little liars and cried in class cause I got an F…and that’s the time I found out I was gay
twaimz / Via twitter.com

The Creepiest Thing That A Little Child Has Ever Asked You
Do People Who Choose To Forgo Having Kids With Their Partner Later Regret That Decision?
20+ Truly Insane Sandwiches Have Actually Ordered At Subway
What is the Status of the California Grizzly Bear?