Teachers Are Sharing The Funniest Things Their Students Have Ever Said, And I Can’t With The Hilarity

Kids and teenagers definitely say the darndest things — and there’s no one in the world that knows that better than teachers. 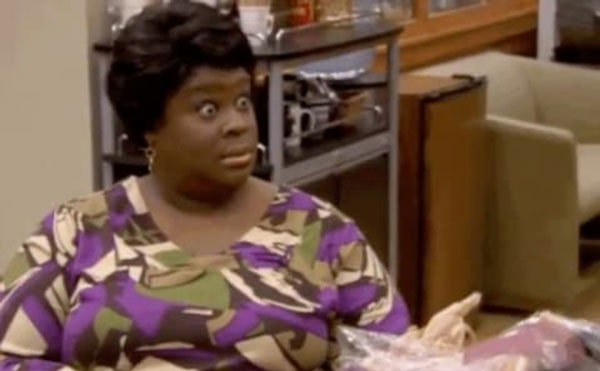 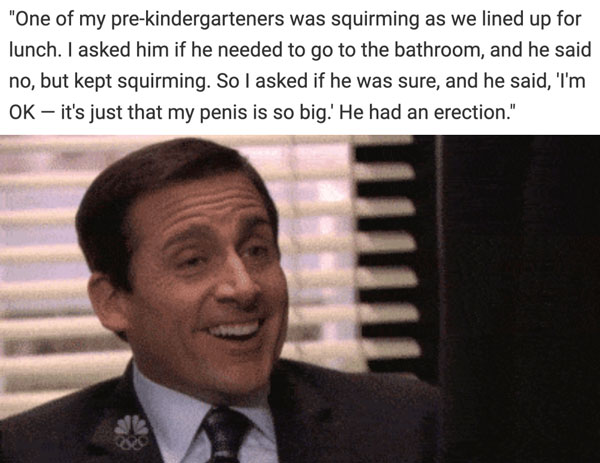 #2
“I wore a Captain America shirt to school for ‘Super Hero Day,’ and one of my students said I looked like Captain America before the injections.”
numero1uno / Via reddit.com

#3
“One of my students was hugging me goodbye when they took a deep inhale, smiled up at me lovingly, and said, ‘Your shirt smells like a grandma, but your armpits smell like Chuck E. Cheese.’”
WalterWhitesHairLine / Via reddit.com

#4
“On Fridays, preschoolers and kindergarteners get their faces painted in the afternoon. Most kids want to be dinosaurs, fairies, or unicorns. One little girl asked to be God.”
eatpoetry / Via reddit.com

#5
“One of my 7th graders asked me where babies come from, and another student replied, ‘Well, when a Mommy and Daddy love each other very much…they get a bottle of scotch and a cheap motel room.”
Reddituser / Via reddit.com

#6
“Once when I worked as a lunch lady, one of my favorite kindergarteners was getting ready to run out for recess when I stopped her and said, ‘Hannah, you should wash your face before you go out — there’s spaghetti sauce all over it.’ She took off anyway, screaming, ‘IT’S MY WAR PAINT!’”
wicked_amb / Via reddit.com

#7
“Once a student asked me what I wanted to do when I grow up.”
reptilefood / Via reddit.com

#8
“I teach elementary band, and once we were preparing for a playing test when one student said, ‘Man, I need to practice.’ Without missing a beat, the kid next to him said, ‘My mom says I need Jesus.’”
moosepajamas / Via reddit.com

#9
“I work with 2-year-olds, and one day a kid was kicking another kid under the table. The first kid asked him to stop, but the second kid kept kicking him, so finally the first kid said, ‘Stop, Motherfu*ker!’ My co-teacher and I died trying not to laugh.
His dad thought it was hilarious when I told him. He said his kid yells at people in traffic, too!”
MalleyMooBeags / Via reddit.com

#10
“I heard a student say, ‘I thought Astronomy would be easy because I know all about it, but he hasn’t even brought up horoscopes yet, and we’re 6 weeks in!’”
chrisrayn / Via reddit.com

#11
“I asked my 4th graders to name some of the things that come from farms, and one of my students said, ‘Hamburgers.’ So I said, ‘Sort of. If we take a hamburger apart, what do we get from a farm?’ He replied, ‘Hamburgers come from hamburger farms, Miss. I read about it online.’”
UnicornGirl24 / Via reddit.com

#12
“I’m a math professor, and I had just finished a proof when I asked my students, ‘Does everyone understand my choices?’ One of my favorite students piped up and asked, ‘Are we talking about your proof or how you’ve chosen to live your life?’”
ColdStainlessNail / Via reddit.com

#13
“I was teaching a lesson on whales in my high school science class, and had just mentioned the sperm whale when a girl asked, ‘Is that why the ocean is so salty?’”
Deadsolidperfect / Via reddit.com

#14
“One of my students asked, ‘Divide a fraction by a fraction? Is that even legal?’”
harper_dog / Via reddit.com

#16
“One of my students asked me when the world stopped being in black and white and changed to color. He was 16.”
mywurstenemy / Via reddit.com

#17
“Last year, I had a very bright kid whose desk looked like multiple tornadoes had hit it. I tried to appeal to his scientific side by telling him about a study about how clutter affects the brain. His response? ‘I’m from Europe — it’s different for us.’”
allaphoristic / Via reddit.com

#18
“One of my students once asked me, ‘If a synchronized swimmer starts drowning, do they all start drowning?’ I lost it in class.”
bunsenbernerr / Via reddit.com

#19
“One of my little 6-year-old students who weighed about 80 pounds at the time walked in late from recess. When I asked him why he was late, he grabbed his hunk of belly with both hands and said, ‘The ladies love this!’ then sat down like nothing happened.”
BoBoShaws / Via reddit.com

#20
“I’m a band teacher, and one day I gave my students blank sheet music for them to start mapping out some basic compositions. The paper had no notes or symbols. One of my students received his sheet music, thinking it was a new song we’d learn, saw that it was blank, and asked, ‘Wow — budget cuts must’ve hit us hard, huh?’”
SquirrelSanctuary / Via reddit.com

#21
“Once I was asking my students when their birthdays were, and one boy said that his birthday was September 31st. I told him that wasn’t possible, but he insisted. So later, I looked it up and informed him that his birthday was actually November 17th. His face brightened, and he said, ‘Well, last year I KNOW it was September 31st!’”
redditstateofmind / Via reddit.com

16 TikTok Life Hacks That Are Honestly Life-Changing
How Long is a Galactic Year?
20 Tender Photos Showing The Deep Bond Between Kids And Their Pets
24 Times Completely Inedible Things Looked So Freakin’ Delicious