21 Really, Really Funny Parents Who Are Definitely Hanging By A Thread

"Ways to piss off your child: Feed them. Bathe them. Clothe them. Breathe."

#1
My kids wanted to know what it was like to be a Mom so I asked them “WHY?” all day long until they cried & ate a whole chocolate cake.
sarcasticmommy4 / Via twitter.com

#2
7-year-old: I need something for school.
Me: What?
7: I don’t remember.
Me: When do you need it?
7: Yesterday.
XplodingUnicorn / Via twitter.com

#3
All I’m saying is parenting should be divided into peak and off peak hours, like train schedules, and off peak should pay more.
SnarkyMommy78 / Via twitter.com

#4
3-Month-Old: I AM VERY TIRED!
Me: Why don’t you sleep?
3-Month-Old: *eyes welling with tears* How fu*king DARE YOU
DrakeGatsby / Via twitter.com

#5
My toddler wants to do everything by himself which is great except he’s fu*king terrible at everything.
Swishergirl24 / Via twitter.com

#6
There are few things more satisfying than when I lock the bathroom door and then hear my kids unsuccessfully twist the knob trying to barge in like, “Not this time, suckas. Not this time.”
copymama / Via twitter.com

#7
It may be passive aggressive but if my kid wakes me up one more Sunday before 5 AM, I’m taking the straw off her juice box when I pack her lunch.
simoncholland / Via twitter.com 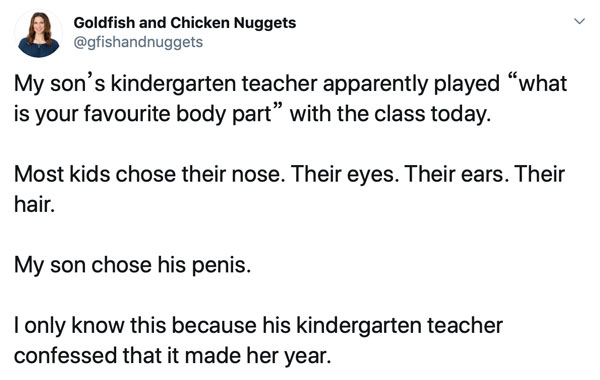 #10
Ways to piss off your child. Feed them. Bathe them. Clothe them. Breathe.
mommy_cusses / Via twitter.com

#11
You can’t take your kids somewhere, spend money on them, and expect them to have a good time. That’s not how it works.
Lhlodder / Via twitter.com

#12
me: *does anything*
my 4yo: [appearing out of nowhere] ok but that’s not how mommy does it
TheCatWhisprer / Via twitter.com

#13
I’m convinced the old lady who lived in a shoe only did it because she knew that was the one place her kids would never be able to find her.
momtransparent1 / Via twitter.com

#14
You think you don’t GAF and then your toddler stares you down while sh*tting in his pants and you realize what not GAF really is.
DadandBuried / Via twitter.com

#15
[teaching teen to drive]
Me: I’ve been waiting for this moment for a long time, sweetie.
Teen: Shouldn’t you be sitting in the passenger seat?
Me: No, this seat is better. *begins kicking her seat*
mommajessiec / Via twitter.com

#16
While it’s impossible to pick a favorite child, it’s easy to identify the one who isn’t your favorite at the moment.
SladeWentworth / Via twitter.com

#18
It’s so cute how my sons ignore me when I ask them to do something.
It’s like they’re little husbands in training.
sarcasticmommy4 / Via twitter.com

#19
Headed to Target to fist fight some nice moms for the remaining school supplies. If I die please know that I hated most of you.
LoveNLunchmeat / Via twitter.com

#20
Me: I’m only going to ask you to clean this mess up ONE more time.
6-year-old: That’s good. I was tired of hearing you ask.
Lhlodder / Via twitter.com

#21
Me: *overwhelmed, exhausted, drowning in stress*
Nobody:
Me: Ok fine, I’ll coach soccer.
LurkAtHomeMom / Via twitter.com