Becoming a functioning adult should come with a warning tbh.

#1
The most liberating Adult thing ive recently discovered is i can eat garlic bread WHENEVER I WANT. I can go to the store, buy a huge crusty loaf, slap some butter and minced garlic on that bit*h, pop it in the oven and bam. Garlic bread for breakfast
jumpedoverthemoon / Via tumblr.com

#2
At what point in adulthood are you suddenly able to tell when meat is cooked through
firyfox / Via tumblr.com

#3
Does anyone actually fold their fitted bed sheets or do we all just agree to not mention it and bundle them up in a ball somewhere no one can see??
theswootasticalstargirl / Via tumblr.com

#4
How did I get this old without developing any time management skills :/
longlivechips / Via tumblr.com

#5
Oh my God, I forgot about MY PILLOWS.
I get to go to bed WITH NEW PILLOWS! And freshly laundered sheets!
This is adulthood, friends. This is what you get excited about when you’re an adult.
bereft-of-frogs / Via tumblr.com

#6
I can confirm that as an adult 85% of your day is spent wondering when you can stop being an adult and just go to bed.
gentlemanharry / Via tumblr.com

#7
me as a child: when I grow up I’m gonna be so organized and healthy and have a house and a car and a dog and-
me, an adult, at 3am: peanut butter counts as a meal, right
woppy42 / Via tumblr.com

#8
One of the worst and best things about being an adult, is that I can eat a full tub of hummus and nobody can stop me
cherryvegan / Via tumblr.com

#10
Dont you hate when you get to work and there’s work to do
moorishlove / Via tumblr.com

#11
Well, I rang in the new year by doing five loads of laundry and putting away most of my floordrobe, so I feel like I’m off to a good start.
nonasuch / Via tumblr.com

#12
Do you ever just like…. get a 404 error on a basic conversation?
wildinkling / Via tumblr.com

#13
me: *gets into bed at 11:59pm*
me: I’m in bed before midnight, look at that! I’m such a Responsible Adult with a functional sleep schedule!
me: *stays on my phone until 3am*
me: SO RESPONSIBLE
fozmeadows / Via tumblr.com

#14
I have more of a maternal instinct for my plant than I do for other children.
arookieblog / Via tumblr.com

#15
BEING AN ADULT IS HARD
I thought I’d have a lot more free time and ice cream
arthur-the-cute / Via tumblr.com

#16
Sometimes I am so tired but I refuse to sleep because I know in the morning I’ll have to get up and do stuff
itshayleybailey / Via tumblr.com

#17
My mom: Why isn’t there any meat in your fridge?
Me: Because I’m not made of money.
stargazeonafullmoonnight / Via tumblr.com

#18
Eating buckwheat cereal with oat milk as dinner is probably the most adult thing i have done in a long time.
thebutterflyboy / Via tumblr.com

#19
You know you’re an adult when you get excited about using a new sponge.
heretherebebooks / Via tumblr.com

#20
Being an adult absolutely means you can eat a giant bowl of mashed potatoes for dinner.
Whose going to stop you?
should-be-sleeping / Via tumblr.com 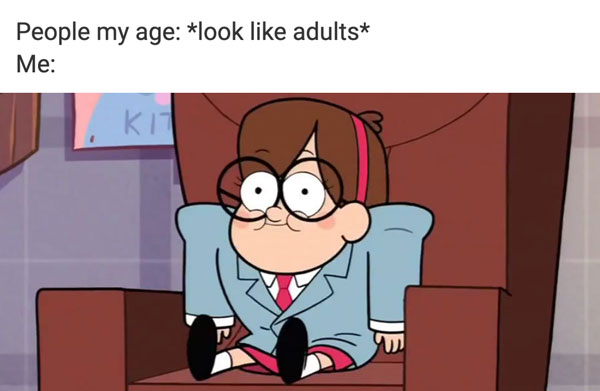 #22
Adulthood is like eating a dinner of leftover tuna salad, leftover Mongolian beef, and leftover Croque Monsieur — no one else would plan that particular meal, and it may be weird and whatever but it still gets the job done.
atmilliways / Via tumblr.com

#23
hello yes i’d like to return Monday and cancel my subscription to Adult Life Daily
aspoonfuloflanguage / Via tumblr.com

#24
You know you’re getting older when cleaning the house is therapeutic after so many years of resistance.
arookieblog / Via tumblr.com

#26
Being an adult is having the money to buy Fruit Loops for breakfast every day but knowing better.
showerthoughtsofficial / Via tumblr.com