#2
Having anxiety is just texting “are you mad at me” to everyone you love over and over until you die
Addison_Peacock / Via twitter.com

#3
i noticed u used “haha” instead of “hahah” so i’m just wondering why u fu*king hate me
kaiteasley / Via twitter.com

#4
literally no one:
me: are you mad at me. you seem like ur mad at me
jazzyrgarcia / Via twitter.com

#5
My therapist and I were talking about how I overanalyze every interaction and think I’ve done something to make people hate me. Then she told me she’s taking a break from doing therapy for a few months. Then we ended my session 20 mins early.
monicavas / Via twitter.com

#6
me to my dentist when I have a cavity: are you mad at me :(
tropicocunt / Via twitter.com 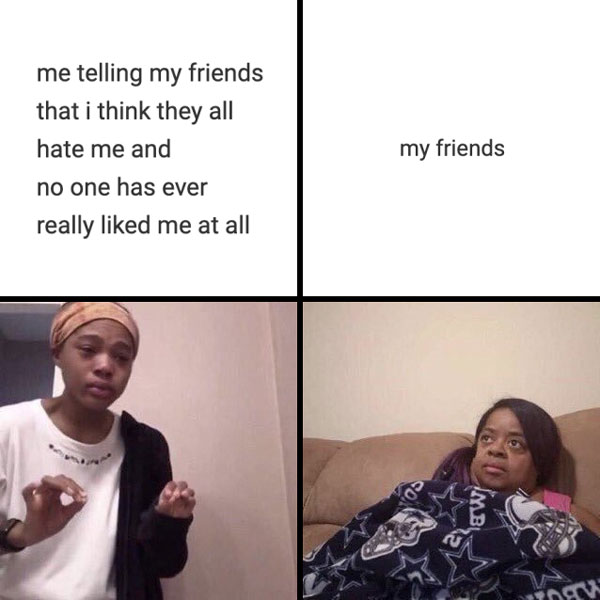 #8
I always convince myself ppl are mad at me. Boss hasn’t responded to my email in 4 minutes? He’s furious. Bff didn’t pick up my call? She can’t stand me. Stranger smiled at me? Wants me DEAD!!!!
alyssalimp / Via twitter.com

#10
sometimes when i’m driving and i don’t see cars for a while i get this terrible fear that my town is doing a whole day where they leave and celebrate how much they hate me like in spongebob
cowboyenergy / Via twitter.com

#11
before i convince myself that all of my close friends hate me does anyone wanna admit they got a crush on me
ieuanofficial / Via twitter.com

#12
my new year’s resolution is to have healthier thought patterns bc as of right now someone can text me “ok” instead of “ok!” & i’ll be in my head assuming they hate me and are praying for my untimely demise
holy_schnitt / Via twitter.com

#13
my kink is asking people who are not mad at me if they’re mad at me until they become mad at me
SarahSquirm / Via twitter.com

#14
since i’m convinced that you hate me due to the lack of expression in your last text i’ll be waiting for you to double text me until further notice
brokeangeI / Via twitter.com

#15
police officer: please step out of the vehicle
me: are u mad at me
kaylasheagg / Via twitter.com

#16
just had a thought….everyone hates me and is plotting against me ? just an idea that popped up
Rachel_Sennott / Via twitter.com

#18
i won’t respond to any messages for days, unless it’s someone i really wanna talk to, n i’ll just let them pile up because i don’t have the energy….. but as soon as someone leaves me on read i’m like…… alright damn so u hate me
milkygoddess / Via twitter.com

Me at the slightest change in tone https://t.co/bGfC2tIiux

21 Cats That Have Their Own Definition Of Logic
What is a Group of Giraffes Called?
20 Dads Who Totally Nailed the Texting Game
What City Has the Most Expensive Rent in the World?