16 Tweets That Perfectly Sum Up YA Book Culture

#1 RIP to all the YA parents out there.
(pitching story idea to a YA book agent)
Me: ok so we have our main heroine
YA book agent: kill her parents
Me: why
YA book agent: just do it
readwithcindy / Via twitter.com 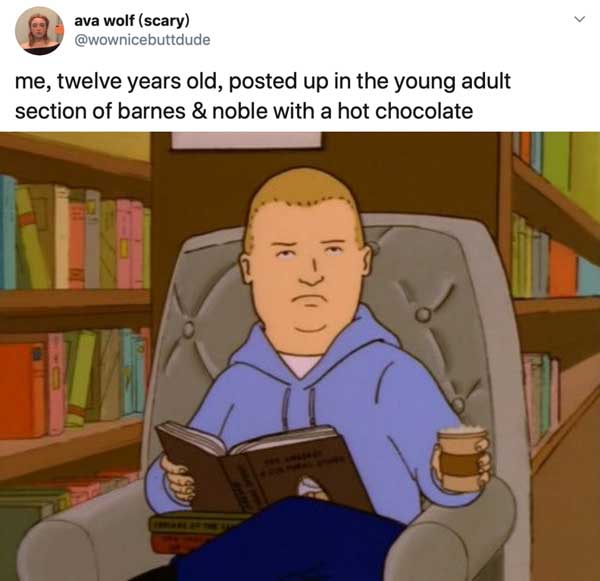 #3 *Yawns.*
I have abandoned several YA books on this vacation because once again the female lead “didn’t think she was anything special until a beautiful boy paid attention to her.”
pernilleripp / Via twitter.com

#4 I have yet to encounter this IRL.
I’ve never met a boy who smells like pine??? Where do YA book characters find these boys??? Are they actually just trees???
hailsinbookland / Via twitter.com

#5 Must. Protect. Book.
Hi I’m a full grown adult and I’m not sure how to tell people that the reason I have a fat lip is because I was sprinting upstairs at night so the monsters wouldn’t get me and I tripped on a dog toy and opted to protect the YA fantasy book I was holding instead of my face.
KayAyDrew / Via twitter.com

#6 2013 was truly a time™.
me:
YA books in 2013: everyone in my society is put into distinct quadrants once we reach the age of 16. ever since the unnamed disaster that caused our dystopian government to be instated, there are rules on how we act, what we wear, & where we live. but i will break these rules
ULTRAGLOSS / Via twitter.com

#7 It’s just the law.
If someone says “why don’t you read real books instead of YA?” you are allowed to sacrifice them to the swamp witch and buy another YA book.
PaperFury / Via twitter.com

#8 Looking at you, Harry Potter. 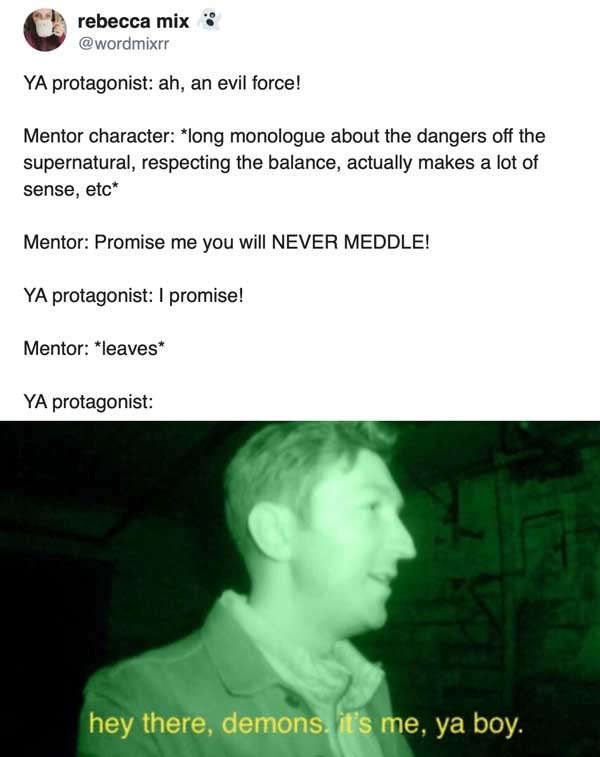 #9 The fandom’s always asking the important questions.
Why does YA fantasy hate soft characters. Why’s everyone an assassin. Where are the chefs
AshiaMonet / Via twitter.com

#10 *Gets bangs again.*
YA protagonist:
you like
my hair
gee thanks
I just just chopped it all off myself in a moment of angst
mike_booklion / Via twitter.com

#11 Sorry, Susan.
Why are people so judgemental about adults enjoying YA books though like sorry I don’t want to read about Susans office romance
RacheyRagdoll / Via twitter.com

#12 Every Yelp review ever is like this.
Reviewer, upon finishing a young adult novel about teenagers: I hated this book because everyone acted like impulsive, passionate teenagers instead of boring, logical thirty-year-olds. Everyone knows REAL teenagers are always rational. 0/5 stars.
broodingYAhero / Via twitter.com

your fave YA novel: https://t.co/6SGyuLvlKc

how to resolve the main conflict of wayyy too many YA contemporary books in 30 seconds pic.twitter.com/awJXN8Bnjk

YA characters when they release a breath they didn’t know they were holding pic.twitter.com/3PtLUecr0K

#16 I think I speak for everyone when I say I’m tired of hearing this.

“i don’t read YA books, i ~*only*~ read adult books” pic.twitter.com/3YZfJSDUoB