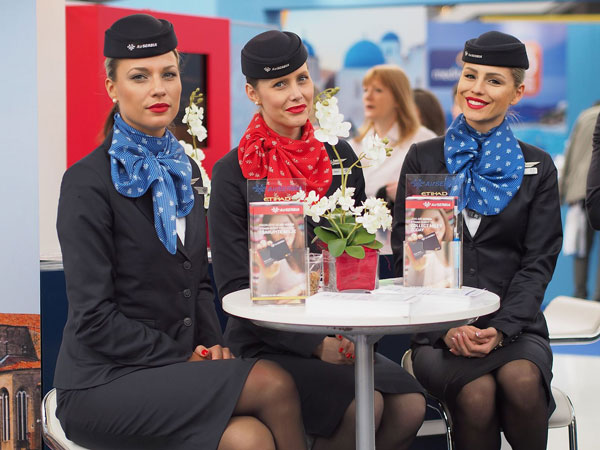 #1
Everyone starts their career in a different way. Some pay for the courses by themselves and then they try to find a job with different companies. Others go through a casting first and sign a contract with an air company and then they go through paid training that is subsidized by the future employer. But after that, the flight attendant is obliged to work for the company for a certain number of years before they can change their job. Or they can pay a penalty.

#2
In emergency situations, flight attendants are supposed to take care of themselves first and then help the passengers.

#3
When female flight attendants start their careers, they sign a contract where they promise not to go on maternity leave for the next 3 years.

#4
All flight attendants can swim very well. One of the requirements during interviews is the ability to swim for 20 to 50 minutes without outside help. This is necessary in case of a water landing. Also, you are taught to survive in any situation — from the rainforest to the mountains.

#5
Flight attendants are paid by the hour, plus given some money for the destination of the flight. An hour on the Washington — New York and an hour on Frankfurt — Sofia, pays different money. It is impossible for one flight attendant to only get the best paying flights: air companies form the schedule so that all the employees have the same access to the worst paying and the best paying flights.

#6
Flight attendants’ seats are different from passengers’ seats. They look uncomfortable, but in fact, they are better in terms of safety: they support the neck, the head, and the back better, and the belts are much more functional. These seats are heavier and more expensive. If passenger seats were the same, ticket prices would be several times higher.

#7
On average, a flight attendant spends about 90 hours a month in the sky. Different companies have different definitions of flight hours: in some companies, it starts right when the plane engines are turned on, and in some — when the plane starts its acceleration on the runway.

#8
When working on a plane, flight attendants get exposed to radiation. In order to protect themselves as much as possible, they are told that they should conduct a healthy lifestyle and get regular medical examinations. After flights, they are told to take vitamins C and E, and also eat more foods that are rich in A, P, and B vitamins.

#9
There is a work schedule where flight attendants have to be very close to the airport for 18 days: at any moment, they could be scheduled for a flight that leaves very soon. Usually, it happens on the weekends and holidays when the air companies have more passengers. But during the remaining 12 days of the month, they can enjoy their rest.

#10
Modern studies claim that a constant change of time zones has a negative effect on health. As a result, the circadian rhythms are disrupted which makes you want to eat and sleep all the time, because the body can’t find the right rhythm and lives in a state of constant stress.

#11
In some air companies, female flight attendants greet passengers and see them out wearing high heels, but during the flight, they wear flat shoes in order to not violate any safety rules.

#12
Hair and nails grow faster on the plane. This is because there is a lot of vitamin D during the flight (at that altitude the atmosphere is thinner and sunlight provides more vitamin D), the pressure is unusual for the body, and due to the production of endorphins, which is caused by being on the plane and landing successfully.

And their metabolism slows down, this is why most flight attendants gain several pounds during their first year of work.

#13
Flight attendants often take food for snacks with them, even if they’re spending the night after the flight in a different town. In these cases, air companies pay for the hotel rooms and give them money for food and some other minor expenses. Some employees buy souvenirs and walk around the city, but many of them put the money on the side. It can be a significant amount of money if you save it for the entire month.

#14
Flight attendants have their own slang. And it doesn’t even have to be words. For example, if they show one finger to their colleague, it means they need tea and 2 fingers means coffee.

#15
Every 6 months, flight attendants have to undergo a medical examination in order to get permission to work. This is something like a regular check-up, it includes visiting an eye doctor, a dentist, a dermatologist, getting a chest x-ray and head x-ray, and blood tests for HIV, typhoid, syphilis, and hepatitis B and C. The people that have had surgeries in the past or who have chronic illnesses can’t work as flight attendants.

All vaccines should be done on time. You can’t work without them.

#16
Passengers leave the plane and rush to pick up their luggage in order to get home faster. Flight attendants see everyone out of the plane and after checking it, then they go to an after-flight briefing where they hear a critique of their work. Only after that, can they finally go home.

#17
It’s not the height that matters, but the ability to reach the highest shelves. And the body mass index is important. This is why people who are too thin or too fat are not hired.

#18
Flight attendants have ID cards that they use to get discounts for plane tickets for themselves, their relatives, and their friends. And even business class tickets are cheaper for them.

This ID card gives them a discount for other services, too, including staying in hotels and visiting restaurants in their free time. With this card, flight attendants can be in any country in the world without a visa from several hours up to several days, given that they are in the country because of work.

#19
If a flight attendant gets sick, then during their training, they begin to train their vestibular system. They can use a regular office chair: one minute, they spin to one direction, and the next minute, they spin in the other direction. And they do this exercise every day for one month until they feel progress.

#20
99% of flight attendants’ lives are scheduled. Even on their days off, they have to stay in great physical shape, take care of their appearance, and they even have to smell good. They can only relax a bit when they are on vacation.

#21
If a flight attendant is wearing a uniform, they can go to the cafe and drink coffee during their break or after work. But they can’t take the coffee with them and walk around the airport with it.

#22
They have a long vacation — up to 72 days, and they can take an early retirement. There is almost no staff turnover. The aviation is a life of constant movement, outside of time zones and countries. It is really hard to get back “on the ground” after that. It’s hard to find another job that provides the emotions and the adrenaline that this job does.

#23
With luxury air companies, flight attendants can’t wear braces, retainers, or even mouth guards, and they have to whiten their teeth in order to make their passengers happy with their perfect smiles. People who have visible birthmarks may not be hired.

#24
People of different professions have superstitions. For instance, some flight attendants believe they can’t sew a button before a flight because the flight will be delayed. And some think that if the first passenger to come on board is a man, the flight will be easy.

#25
There are no tips for flight attendants, but some air companies have bonuses for selling products from the catalog on board.

#26
You can bring water on board if you pour it in a bottle made of food polymer. The security service scanner won’t be able to see the liquid inside of it.

#27
When a flight is delayed, flight attendants aren’t working, meaning they are losing money, not only for this flight, but also for the flights that were scheduled for the same day after it. Unlike passengers, flight attendants don’t get any kind of compensation.

#28
In order for the food to not seem tasteless because of the pressure changes, it is always over salted and people get drunk from alcohol much faster. The chances of having a stroke because of drinking alcohol on a plane, are higher than the chances of dying in a plane crash.

#29
During the flight, it is prohibited to use the phone: it is supposed to be turned off as soon as the pre-flight briefing starts and turned back on when the working day is over or in between flights, for example, during lunch.

#30
Female flight attendants have their own techniques of putting on makeup: they have to moisturize their face a lot because the air on the plane is dry and they have to only use very durable beauty products that often dry out the skin a lot. During the flight, they use thermal water to freshen up their skin, and moisturizing masks help during their breaks. And there is no way you will find any matte creams or powder in a flight attendant’s handbag.

#31
Some air companies give their employees free accommodations. For example, all flight attendants of Emirates Airlines move to live in Dubai: the air company pays for all their expenses in terms of accommodations, gives them a free gym membership, a sauna, and laundry services in order to keep their uniform in perfect condition all the time. And also, they can invite some of their relatives to live with them for 2 months at a time.

#32
While on the ground, flight attendants either sleep or study: they learn about the new rules and documents, they exercise on special training machines, they increase their qualifications, they pass different tests and exams, and they get health examinations. They don’t have enough time for relationships.

#33
Flight attendants always wear watches with a second hand in order to watch the time when following the pilots’ commands.

#34
Every flight attendant on the flight has their own number that defines their duties on the flight. For example, there are 4 flight attendants. 1L is the chief attendant that fills out the papers and works with the pilots and the passengers. 1R also works with passengers, but is responsible for the food, drinks, and equipment. 3L works with the first-aid kits, comforters, pillows, napkins, and so on, and also helps to work with the economy class passengers. 3R is responsible for selling products onboard and preparing the food carts, makes tea and coffee, and also helps with the economy class passengers.