20+ Pieces Of Advice People Learned From Their Therapists

"The best thing a therapist ever told me is that society doesn’t need to be the one to set my schedule...There’s no correct mold to fit, just find whatever works best for me."

Many of the answers were extremely helpful*, so here are some of the best ones:
*And though these tips are a great place to begin, they’re not a replacement for speaking to a professional. 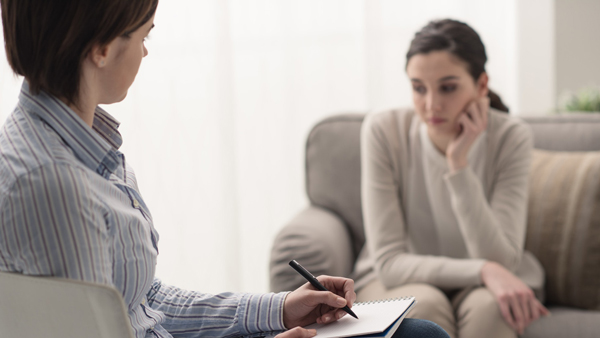 #1
Avoid saying “should”. It’s too easy to fall into pressuring yourself and pushing yourself too much. Reframe and rephrase.

#3
Your inner child isn’t just your inner joy, it’s also your inner anger, your inner pain, the part of you that cries out. How would you talk to a child about their pain? How would you be tender to them and help them understand it? Treat yourself with the same tenderness.
kendrawcandraw / Via twitter.com

#4
Anger is pain pretending to be powerful.
Behind every complaint is a desire. Say what you desire instead.
The brain is like a wheat field. Old pathways are worn and easy to tread. You have to choose a new path again and again before it becomes the easier one to walk.
CatherineLynneW / Via twitter.com

#5
The best thing a therapist ever told me is that society doesn’t need to be the one to set me schedule. I’m allowed to eat breakfast at 11, go to bed at 1am. There’s no correct mold to fit, just find whatever works best for me.
_sputnik1 / Via twitter.com

#6
Do not attempt to understand why a dysfunctional person does what they do. Dysfunction has no logic behind it. Knowing This, has spared me anxiety and unneeded turmoil
greciasmall / Via twitter.com

#7
I told my therapist, after several weeks of anxiety reduction, that maybe I’m someone who never will be “happy”. And she told me that happy people aren’t continuously happy. Happy people just experience less anxious and depressed days, and that definition helped me reach “happy”.
JessOndras / Via twitter.com

#8
I don’t need people who have hurt me to acknowledge the hurt for it to be real. My pain can be acknowledged and validated by me. It is not dependent on the validation of the ones who caused it.
kwte428 / Via twitter.com

#9
It’s ok to not be busy and to not offer to others a reason I do or don’t do each thing.
CindyGross / Via twitter.com

#10
Our self-destructive behaviors are almost always about control: a way of proving to ourselves that we’re still steering the ship of the self, even if the waters around us are turbulent and unpredictable
hels / Via twitter.com

#11
1. You cannot rationalize yourself out of an anxiety attack.

2. Some days, all you can do is survive and doing that is just as productive as the days you Do All The Things that we call productive.
UntoNuggan / Via twitter.com

#12
When you are depressed than anything worth doing is worth doing poorly.
Haven’t showered? just stand in the shower for a few minutes.
Need to clean your space? just throw out a few things!
Need exercise? walk around the house.
Need to eat? at least have some crackers!
TinaDayton / Via twitter.com

#13
- saying “no” can be an act of love
- shame is an obstacle to growth
gaywonk / Via twitter.com

#14
Your brain literally can’t do as much when you’re grieving/burned out/emotionally overloaded, and forcing it to try is like driving on flat tires: maybe short term OK to get to the shop, but long-term it will ruin your rims.
ReneeStephen / Via twitter.com

#15
I’ve saved myself a lot of anguish by learning to accept people for who they are rather than being disappointed because they’re not who I wanted them to be.
renireni / Via twitter.com

#16
Big take away- Pay attn to your inner-child. When you feel yourself overreacting or getting triggered, she’s usually the source. Check in with her, ask her what she needs without judgement, give it to her, parent her, physically love on her and then send her off to play.
lespwafeviv / Via twitter.com

#17
Your primal brain doesn’t know the difference between your imagination and a lived experience, so the more you imagine playing out the worst case scenario the deeper you ingrain your fears and create anxious/self destructive responses.
ElenaBjxrn / Via twitter.com

#18
You should tell your therapist when a technique they’re trying doesn’t do anything for you instead of playing along so you don’t hurt their feelings.
hannahmosk / Via twitter.com

#20
Feelings aren’t “good” or “bad.” They’re just feelings. Also a really good visualization for anxious thoughts is to imagine them as the crawl on a news channel. You’re not ignoring them, you’re just not letting them take up the whole screen.
kittenwithawhip / Via twitter.com

#21
If you have a crippling fear of failure the best thing you can do for yourself is fail HARD at something.
Odds are all that will happen is your definition of failure will change.
InnuendoStudios / Via twitter.com

rip off the “cant control” part and let it go.
You’re giving too much of your emotional energy to what you can’t control that you neglect what you can. Save your energy
LadyDevann / Via twitter.com

#23
The fact that other people have had it worse has absolutely nothing to do with whether or not you “deserve” to feel pain/anger/sadness over something you’ve been through
lillydancyger / Via twitter.com

#24
You don’t have to always bend over backwards to make plans work for people who have a history of not respecting your time or schedule. You can just say “it’s at this time! hope you can come!” and MOVE ON WITH YOUR LIFE
sarahhollowell / Via twitter.com

#26
You can empathize with someone without making it your responsibility to change how they feel.
DrSprankle / Via twitter.com

#27
If you are repeatedly engaging in a thought pattern or behavior, it’s serving you in some way — that doesn’t mean it’s good for you! but if you can figure out what need it’s fulfilling you can start to address the root cause (and have empathy for yourself in the process).
AllegraEHobbs / Via twitter.com

#28
If you’ve been in a shipwreck you might have held on to a plank of wood to stay afloat but to climb aboard the rescue ship you need to let go of the plank of wood
RosiannaRojas / Via twitter.com

If some of the things in this list were familiar, you might want to look into ways to take care of yourself. So, here are some quick resources:

You can learn more about anxiety disorders here.

And if you need to talk to someone immediately, the US National Suicide Prevention Lifeline is 1-800-273-8255. A list of international suicide hotlines can be found here.