#1
You: I grind every day, working 400 hours a week in my 20s so I can build for wealth in my 40s. You can keep making excuses if you want but all it takes is some hard work to-
The climate crisis: Are you in the right headspace to receive some information that might hurt you
hermit_hwarang / Via twitter.com 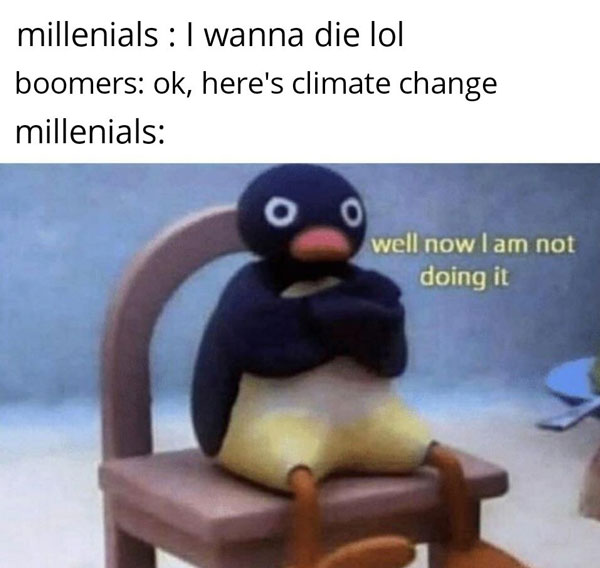 #3
DJ: throw ur hands in the air like u just don’t care
Me: *cupping my hands to make a megaphone* SORRY BUT I DO CARE ABOUT CLIMATE CHANGE
DJ: *stops music* guys she’s right
girlnarly / Via twitter.com

#4
Do rich people know climate change will end their ski trips? Have we emphasized that angle?
ginadivittorio / Via twitter.com

#5
When i said “i got the horses in the back” it was in reference to reversing the ongoing climate change, water pollution, and catastrophic political climate we are witnessing in these trying times.
LilNasX / Via twitter.com 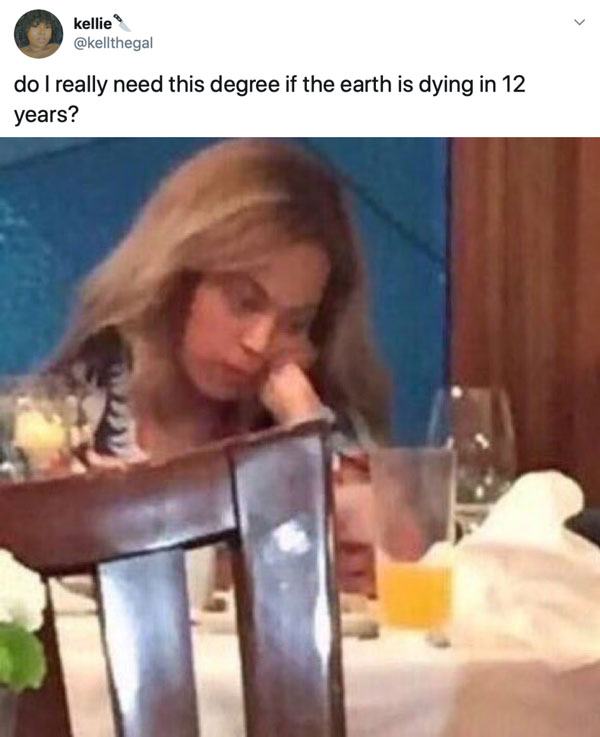 #7
By the age of 22 you should have:
•had 2 existential crises
•known you can get free chick fil a by filling out the survey on the receipt
•impending anxiety about climate change
•a mild adderall addiction
•experienced crippling loneliness & insecurity due to dating apps
EwdatsGROSS / Via twitter.com

#8
Them: OMG snow in unusual parts of Arizona??? This hardly ever happens, what a miracle!
The Earth: [literally dying] haha yeah dude, miracle for sure
CdyRnkn / Via twitter.com

#9
Maybe Jesus isn’t coming and we’ve neglected warnings from scientists about climate change for over 30 years
seizurehaver / Via twitter.com

#10
Not using plastic straws is the thoughts and prayers of climate change
braag_ / Via twitter.com

#11
If it weren’t for that iceberg sinking the titanic we never would have gotten the movie that launched Leonardo into stardom no wonder he’s so passionate about climate change he owes icebergs his whole career
CaucasianJames / Via twitter.com

#12
Please make all films 90 minutes or less, earth is dying, thank you. 100min if you bribe me.
melvillmatic / Via twitter.com

#14
Bees are dying and the ice caps are melting so confess ur love now.
andyng0 / Via twitter.com

#15
THANKSGIVING GAME: nobody gets pie until you go around the table & everyone has to say “climate change is real”
aparnapkin / Via twitter.com

#16
At age 23, Oprah was fired from her first reporting job
At age 30, Harrison Ford was a carpenter
Morgan Freeman landed his first major movie role at age 52
They all had time
Because climate change wasn’t as pressing an issue for their generation
You? Probably no time.
bennymofodavis / Via twitter.com

#17
Having a job is weird because we’re in the middle of a major extinction event
lizzoaw / Via twitter.com

Just found out we got 18 months to save the planet before climate change becomes irreversible pic.twitter.com/HdGqGMxu7U

20 People Who Just Wanted A Tasty Meal, But It Didn’t Pan Out
20 Brutally Funny Marriage Tweets I Can’t Get Out Of My Head
18 People Who Are Wayyyyy Smarter Than I’ll Ever Be
18 Lessons You Should Stop Teaching Your Kid Immediately