#1
Having kids is great if you’ve ever looked at your marriage and thought, “if only we could create some extra conflict…”
diducherishtho / Via twitter.com

#2
I always thought I’d be a patient mom.
And then I had to listen to my son tell a story.
sarcasticmommy4 / Via twitter.com

#3
Good luck robbing my house. My home security system is LEGOs on the floor.
mommajessiec / Via twitter.com

#4
At my daughter’s 4-year checkup, the doctor said she should be eating a varied diet and to make sure she’s eating a good amount from each food group and I think she said a bit about trying new foods but not sure cause I got distracted wondering if she’d ever actually met a 4yo.
SnarkyMommy78 / Via twitter.com

#5
My daughter threw a tantrum because she felt it was too early to be spoken to and it really is a miracle that we create little versions of ourselves
mom_tho / Via twitter.com

#7
My 4yo grabbed the egg off my egg and cheese sandwich, put it on her plate, took a bite of it and then grabbed the rest in her hand, squeezed it shut and handed it back to me saying she didn’t want it anymore. And this… THIS, is why I can’t have nice things.
SnarkyMommy78 / Via twitter.com 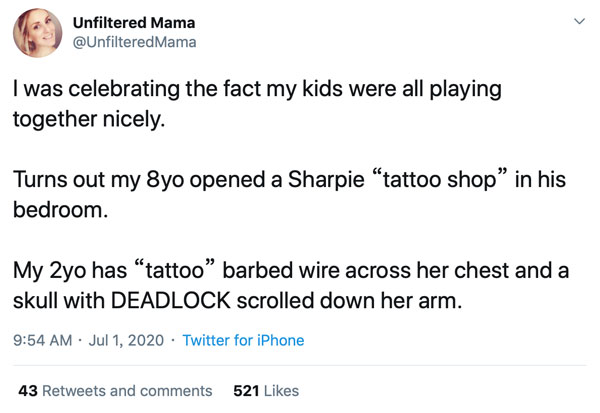 #9
Have kids so they can do things like smack your thigh and yell: SO WIGGLY
pro_worrier_ / Via twitter.com

#10
Does anyone have directions to that village everyone says will raise my children?
It sounds wonderful.
survivingmommy_ / Via twitter.com

#11
“Sorry I don’t make the rules” I say blatantly lying to my child about a rule I just made up.
HeatherStenwall / Via twitter.com

#12
A surprising amount of parenting is bribing your kids with things you don’t want to do, then breathing a sigh of relief when they mess it up so you don’t have to deliver.
TheNYAMProject / Via twitter.com

#14
Having kids is a great idea if you’ve ever looked at your markers and thought “if only they were a bit drier…”
SnarkyMommy78 / Via twitter.com

#15
Parenting hack: Tell much lamer bedtime stories than your spouse so that your children will ask for them instead of you every night.
MetteAngerhofer / Via twitter.com 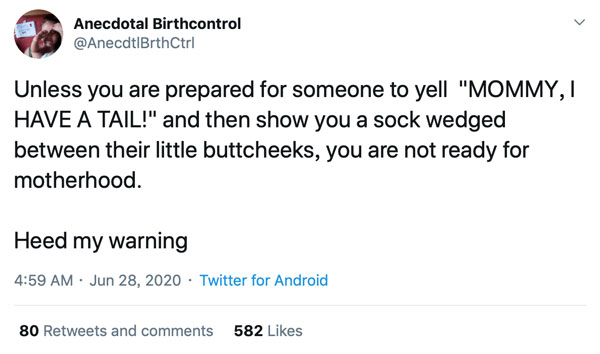 #19
The kids were bored so I suggested they play with any of the 8000 toys we have in the house and then we all laughed as I turned on Netflix.
MumInBits / Via twitter.com

#20
My daughter wanted to keep a few rocks from the lake, but I said no, and anyway that’s why there are rocks in my purse.
lmegordon / Via twitter.com

#21
My 4YO fell off his scooter, and before I could help him, he stood up, dusted off, and whispered to himself, “shake it off big dawg.”
I’ve never been more confused about whether something was a parenting win or fail.
not_thenanny / Via twitter.com

#22
If listening to your kid tell a story burned calories, I’d be invisible.
sarcasticmommy4 / Via twitter.com

#23
I always thought I’d be a patient mom, but I don’t like who I become 30 seconds into my son’s guided tour of his Minecraft village.
Six_Pack_Mom / Via twitter.com

#24
I’m not saying parenthood is hard, I’m just saying I was a LOT better at it before I had kids.
momtransparent1 / Via twitter.com

15 Examples Of “Positive Masculinity” To Restore Your Faith In The Male Species
Chimpanzees Can Develop Their Own Fashion Trends
“Why I Hate My Uncle”, by Hitler’s Nephew
Here’s Why You Should Never Throw Out Those Annoying Silica Sachets Again