#1 When Nick (Jason Bateman) told the sloth this knee-slapper at the DMV:
What do you call a three-humped camel? Pregnant! 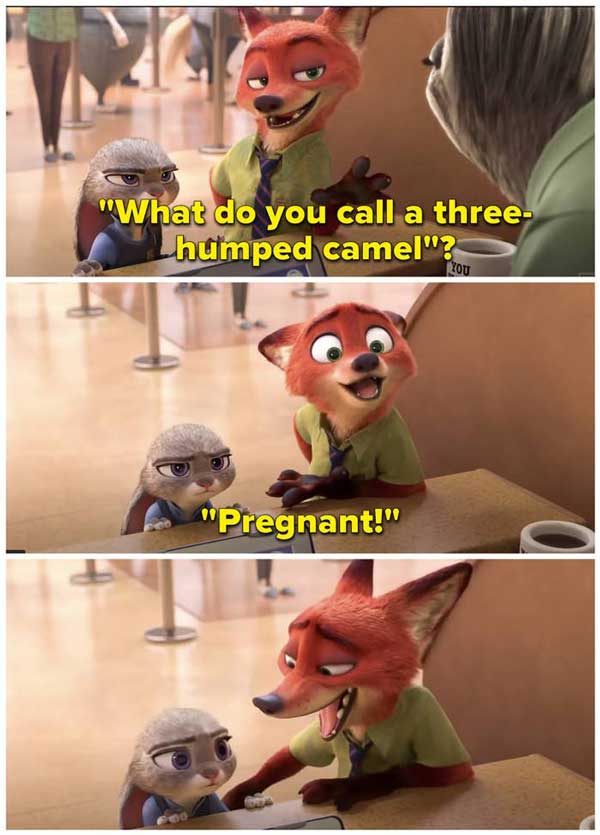 #2 In Her, when Theodore (Joaquin Phoenix) told his A.I. virtual assistant Samantha this one:
Theodore: “What does a baby computer call its father?”
Samantha: “I don’t know. What?”
Theodore: “Data.” 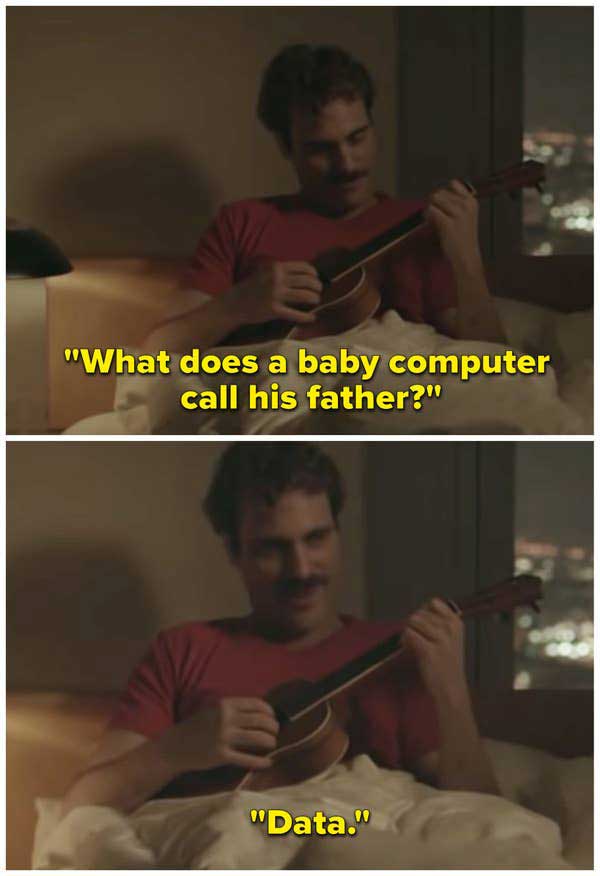 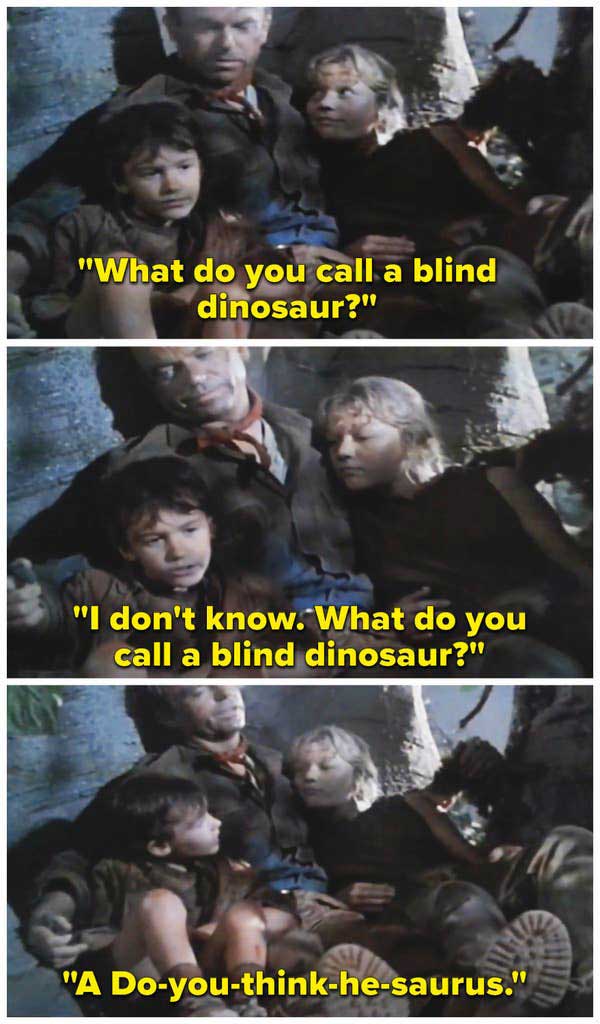 #4 In 28 Days Later, when Mark (Noah Huntley) tells this animal-themed joke:
A man walks into a bar with a giraffe. They both get pissed. The giraffe falls over. The man goes to leave and the bartender says, “Oi. You can’t leave that lyin’ there.” And the man says, “No. It’s not a lion. It’s a giraffe.”

#5 In A Prairie Home Companion, when Lefty (John C. Reilly) tells Dusty (Woody Harrelson) this one while performing the song “Bad Jokes”:
Lefty: “Did you know diarrhea is hereditary?”
Dusty: “No, I did not.”
Lefty: “Yeah, it runs in your jeans.”

#6 In Fargo, when Marge (Frances McDormand) told this yucker:
Say Lou, didya hear the one about the guy who couldn’t afford personalized plates, so he went and changed his name to J3L2404? 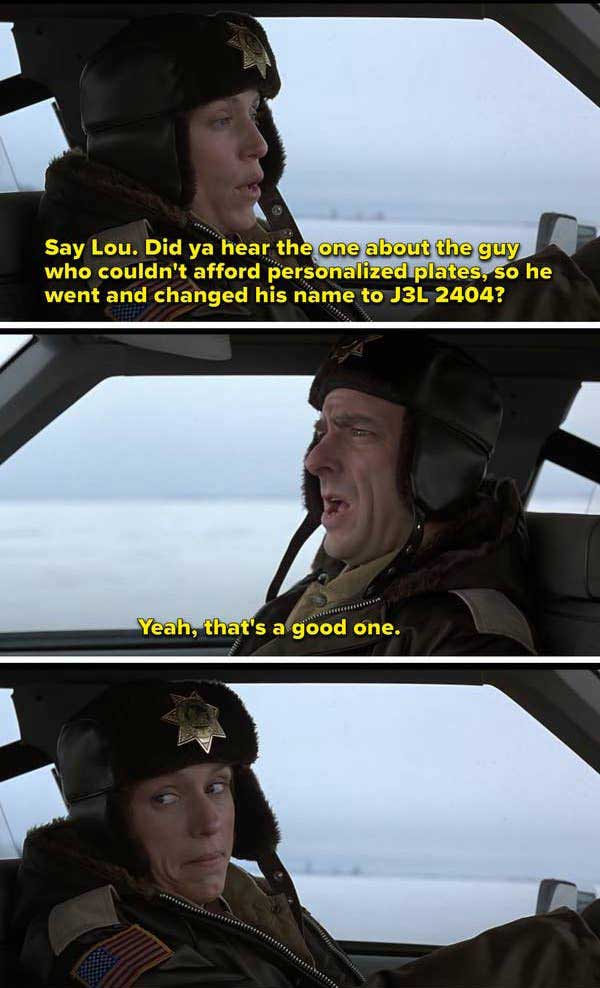 #8 In Mary Poppins, when Uncle Albert (Ed Wynn) told this funny one that started out sad:
Uncle Albert: “Yesterday, when the lady next door answered the door, there was a man there, and the man said to the lady, ‘I’m terribly sorry, I just ran over your cat.’”
Jane: “Oh, that is sad.”
Michael: “The poor cat.”
Uncle Albert: “And the man said, ‘I’d like to replace your cat.’ And the lady said, ‘That’s all right with me, but how are you with catching mice?’”

#9 In Kiss Kiss Bang Bang, when Perry (Val Kilmer) directed this angry joke at Harry (Robert Downey Jr.):
Perry: “Look up ‘idiot’ in the dictionary. Do you know what you’ll find?”
Harry: “A picture of me?”
Perry: “No! The definition of the word ‘idiot,’ which you fu*king are!” 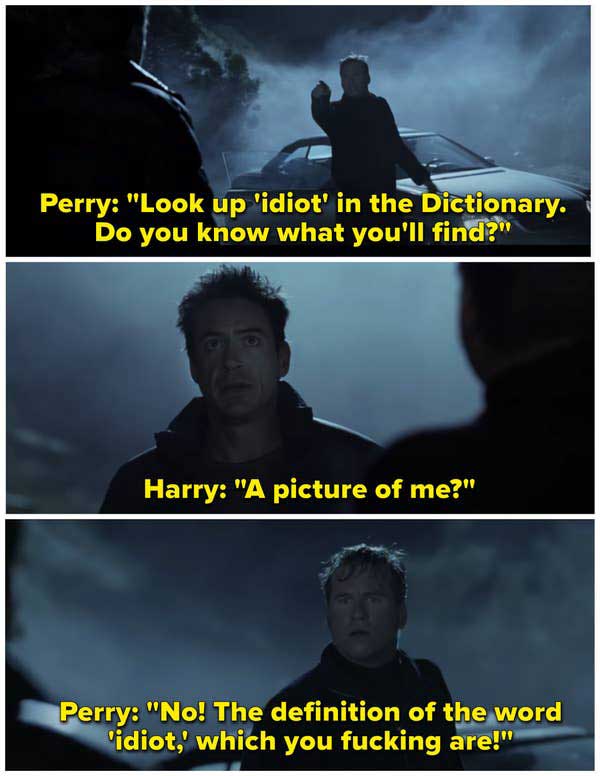 #10 In The Pursuit of Happyness, when Chris Jr. (Jaden Smith) told this joke that’ll make you think:
Hey Dad, you wanna hear something funny? There was a man who was drowning, and a boat came, and the man on the boat said “Do you need help?” and the man said “God will save me.” Then another boat came and he tried to help him, but he said “God will save me.” Then he drowned and went to Heaven. Then the man told God, “God, why didn’t you save me?” and God said “I sent you two boats, you dummy!”

#11 When the android Andrew (Robin Williams) told this joke in Bicentennial Man:
Two cannibals were eating a clown. One turns to the other and says, “Does this taste funny to you?” 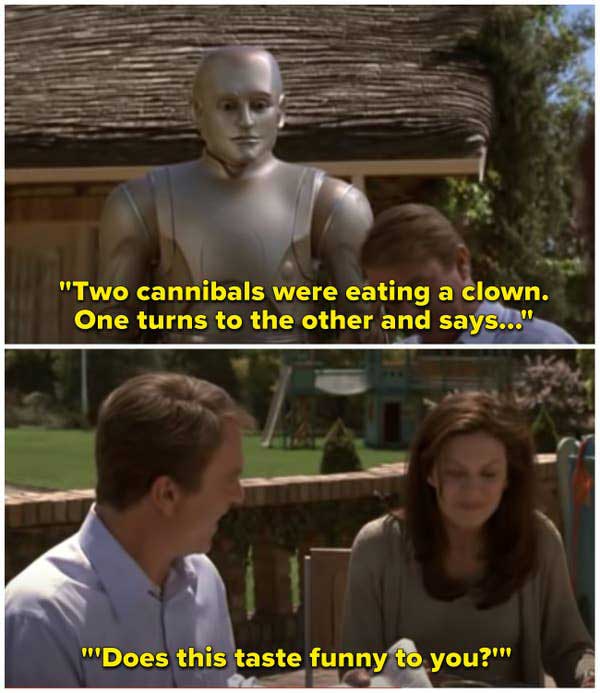 #12 In Pulp Fiction, when Mia (Uma Thurman) told this joke:
Three tomatoes are walking down the street: a papa tomato, a mama tomato, and a little baby tomato. Baby tomato starts lagging behind. Papa tomato gets angry, goes over to the baby tomato, and squishes him…and says: “Ketchup.”

18 Of The Best Celeb Tweets So Far This Year
Texas’s Maternal Mortality Rate Was Unbelievably High
Do Dolphins Recognize Themselves in a Mirror?
How To Make People Like You In 5 Minutes Or Less